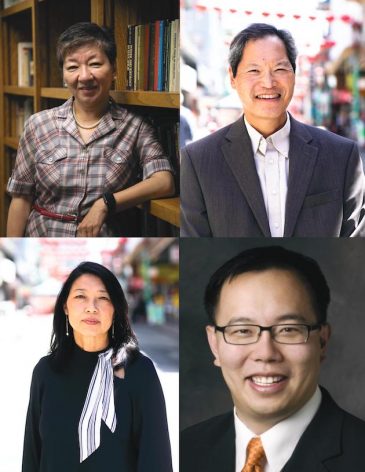 California, Apr 28 (IPS) – Dr. Boyung Lee, a widowed senior vice president for academic affairs and dean of Iliff Divinity School, was taking a short break from work to walk around her neighborhood. The fresh air helped her deal with her pain and her job-related stress.

However, in May 2020, this small but significant daily ritual came to an abrupt end.

Lee was walking when he noticed a dirty white truck, but he didn’t give it much thought. He kept walking, then he heard something. The noise continued, and when he looked back, he noticed that the driver inside the truck was yelling at him.

Listening closely, Lee realized he was making fun of her, including using one of the common taunts directed at the Asian American and Pacific Islander (AAPI) community: “Go back to your country.”

Slightly shocked by this hostile confrontation, Lee kept walking. However, the driver followed her. Fortunately, Lee acted quickly and ran into the driveway of his neighbor’s apartment building, so the driver couldn’t follow her.

The incident made her feel insecure. She even she was nervous about grocery shopping. The verbal attack turned an independent Korean-American feminist into a dependent person.

Lee now covered herself with masks and hats to prevent others from noticing that she was Asian.

She began to feel safe when her classmates offered to accompany her on her walks. Outside of that though, Ella Lee was scared. It took Lee more than a year to feel comfortable going out to work alone.

Angry that her experience had made her dependent, Lee thought about how she could educate the public about the beauty of Asian culture.

Teaming up with some Asian colleagues, he brought in Asian-American artists. She organized conferences and workshops to educate the community about the intersection of Asian culture and art. Through this experience, Ella Lee felt empowered and returned to being the independent feminist she once was.

Lee is not alone in her experiences of Asian hate abuse. Many in the AAPI community faced harassment, discrimination, and abuse.

When a Pacific Islander spoke in Chamorro at a mall in Dallas, Texas, a passerby coughed at her and taunted her: “You and your people are the reason we have corona. Go sail on a boat back to your island.”

A mother tried to enroll her daughter in a gym class in Tustin, California. However, the owner refused because the mother’s name was ‘Asian’. These were two of numerous incidents reported by Stop AAPI Hate, an advocacy group that works to end racism.

The rise in hate crimes against Asian Americans stems from the origin of the virus. COVID-19 was first identified in Wuhan province, China. Due to its origin, hostile rhetoric was used to connote the coronavirus, such as “Kung Flu”, “Chinese virus” and the “Wuhan virus”. Racializing the virus led to an uptick in racism, prejudice, discrimination, and hate crimes against Asians. Common verbal bullying included: “Go back to China” and “Take your virus, Chinese!”

Asian Americans were blamed for “bringing the virus” to the United States.

Russell Jeung, Professor of Asian American Studies at San Francisco State University, worked with Cynthia Choi, Co-Executive Director of China Affirmative Action, along with other leaders, to spearhead the mission to fight anti-Asian racism. Jeung wanted to provide resources to the Asian-American communities so that this harassment would not happen again.

Together with Choi and Manjusha Kulkarni, director of the AAPI Equity Alliance, Jeung founded Stop AAPI Hate to find solutions to the underlying causes of discrimination and hate. She formed a research team of San Francisco State University students to collect data to create the reports published on the Stop AAPI website. Jeung and her students discovered that hate crimes against Asian Americans occurred more frequently in California.

Jeung also noted that Asian Americans were taking a stand against racism.

Asian Americans took to their social media platforms and used hashtags, such as #Racismisavirus, to ensure their posts went viral. Another trend Jeung witnessed was Asian Americans electing officials who would speak out against xenophobia.

As a result, Asian Americans turned out in large numbers to vote in 2020. As Jeung explained, Asian Americans voted for candidates who would support their beliefs and vowed to fight xenophobia.

Chinese Affirmative Action, a community civil rights support organization to protect the rights of Chinese and Asian Americans, and Stop AAPI Hate, collected first-hand accounts from people who self-reported what was happening and what was happening. told them.

The two organizations have been working to promote racial equity by addressing racial tensions between Asian communities and other communities. These reports helped them understand the nature of the violent attacks. So far, more than 3,700 cases have been reported to these organizations. They also work with the media to share information.

“Certainly in my lifetime, we have not witnessed this level of hate directed at our communities,” Choi lamented.

Bryant Lin, Clinical Associate Professor of Medicine at Stanford University School of Medicine and co-director and co-founder of the Asian Health Education and Research Center, led a project that investigated people’s perceptions of the relationship between COVID-19 and discrimination. He surveyed nearly 2,000 people across the country.

Although Asians are highly diverse and heterogeneous (there are six major subgroups in the United States), they are treated as a monolithic group. Lin revealed that East Asians tended to experience more discrimination than South and Southeast Asians. The highest rates of self-reported discrimination were from Chinese Americans.

“Our study also found that people were very concerned about physical attacks and were also considering buying firearms,” ​​Lin said. She added that they would likely do additional study on how perceptions changed.

Report of the UN Office of IPS