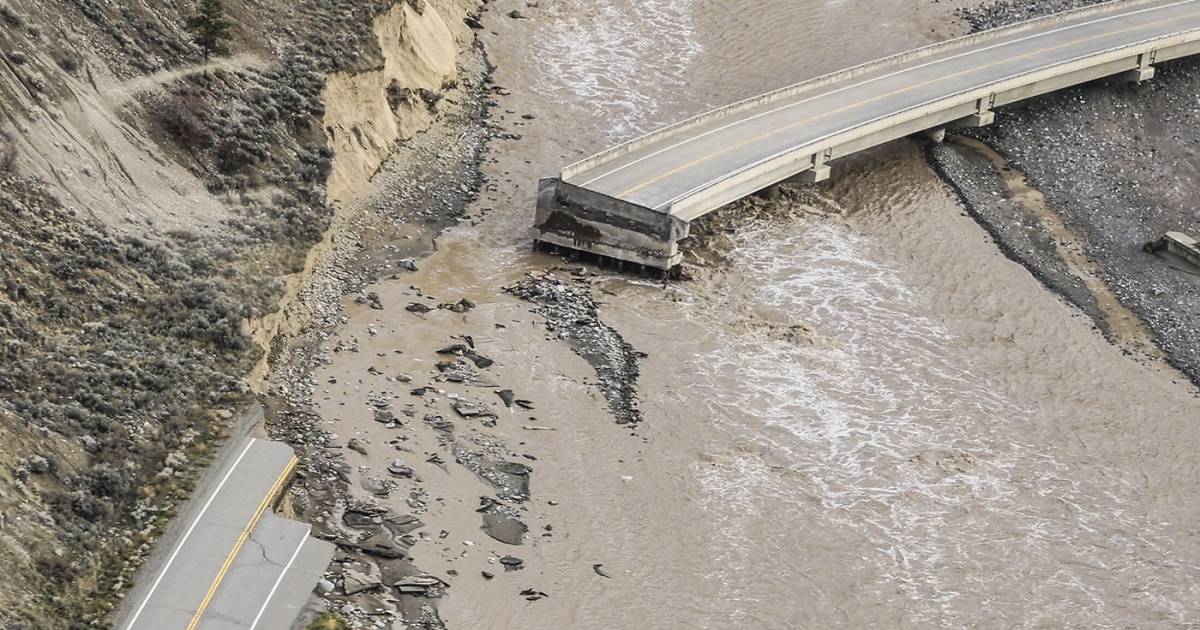 There are a couple of key takeaways for British Columbians from the climate crisis.

Rising levels of water vapor in the atmosphere due to a warming Pacific Ocean is bringing more torrential downpours to the province. And that is having devastating economic consequences.

The second key takeaway is that heat domes are far more deadly than extreme rainfall events.

In the worst cases, atmospheric rivers are bringing extreme precipitation further into the BC mainland, in some cases changing the topography of the landscape.

An early sign of this occurred in 2013 when a record amount of rain fell in the Kootenay-Columbia River region, cutting off highway access.

But that was far less serious than what happened last November when heavy rains caused the Coldwater River to change course through Merritt, which suffered historic flooding.

As a result of that storm, the Nicola River also changed course, washing away large sections of Highway 8 between Spences Bridge and Merritt.

The Coquihalla highway was also washed out in places.

The billions of dollars in damage caused by the November floods, which also affected Abbotsford and Princeton, left a lasting impact not only on the economy, but also on people’s psyches. If it could happen once, could it happen again?

Unfortunately, the answer is probably “yes”.

This is why. Two 19th-century thermodynamics researchers, Rudolf Clausius and Benoît Paul Émile Clapeyron, discovered that for every 1°C rise in temperature, the atmosphere can hold 7 percent more water.

As the planet warms, this is adding a powerful blow to storms coming in from the Pacific Ocean, putting BC at the forefront of the climate crisis.

As warming increases, and it will do so because of the “carbon lag” of current emissions, it is likely to bring more and possibly even larger atmospheric rivers to the province.

But something else is also happening over the Pacific Ocean.

According to the US National Oceanic and Atmospheric Administration, warmer water temperatures in the western part of this body of water also contribute to heat waves.

On its website, NOAA compares the ocean to a swimming pool when the heater is turned on. Using this analogy, temperatures rise faster in the areas closest to the heater jets.

“If one thinks of the Pacific as a very large swimming pool, temperatures in the western Pacific have increased in recent decades compared to the eastern Pacific, creating a strong temperature gradient, or wind-driven pressure differences, across the globe. ocean in winter. ”, states NOAA.

“In a process known as convection, the gradient causes more warm air, heated by the ocean surface, to rise over the western Pacific and less convection over the central and eastern Pacific,” he continues. “As prevailing winds move warm air eastward, northward displacements of the jet stream trap the air and move it toward land, where it sinks, generating heat waves.”

Evidence suggests that those heat waves become more intense when undulating atmospheric Rossby waves, which are associated with pressure systems and jet streams, become “quasi-steady” and much more amplified.

This was explained in a 2017 article published in scientific reports.

“In summary, our analysis of both historical model simulations and observational surface temperature data strongly suggests that anthropogenic warming is affecting the zonal mean temperature profile in a way that leads to resonance of the surface temperatures.” waves and the consequent increase in persistent weather extremes in the boreal summer. climate researchers Michael Mann, Stefan Rahmstorf, Kai Kornhuber, Byron A. Steinman, Sonya K. Miller and Dim Coumou wrote.

“Combined with other additional mechanisms proposed for climate change impacts on extreme weather, this adds to the weight of evidence for a human influence in the occurrence of devastating events such as the European heat wave of 2003, the Pakistan flood of 2010 and Russian Heat Wave, 2011 Texas Heat Wave, and Recent Flooding in Europe”.

The article was published before the 2021 heat dome that killed nearly 600 British Columbians. It offered more evidence that the weather is interfering with jet streams, which are narrow bands of wind in the upper atmosphere that blow from west to east.

They follow the boundaries between hot and cold air.

“As the temperature difference between the two locations increases, the strength of the wind increases,” NOAA explains on its website.

But in summer, with a warmer arctic region, the temperature difference decreases, slowing down those jet streams. And that could be a factor: So many people died last summer due to extreme heat in BC

One of the most recent examples of extreme flooding occurred in South Africa, killing hundreds and leaving tens of thousands homeless, according to the guardian.

Mann, the principal investigator of the 2017 paper in scientific reportswas recently on the BBC to discuss the role of the climate crisis in this event.

“At some point, it’s really basic physics,” Mann told the BBC. “A warmer atmosphere holds more moisture. So when it rains, it rains more in shorter periods of time. That’s what we’re seeing here: unprecedented flooding. About two centimeters of rain fell per hour over a 24-hour period.” . period.”