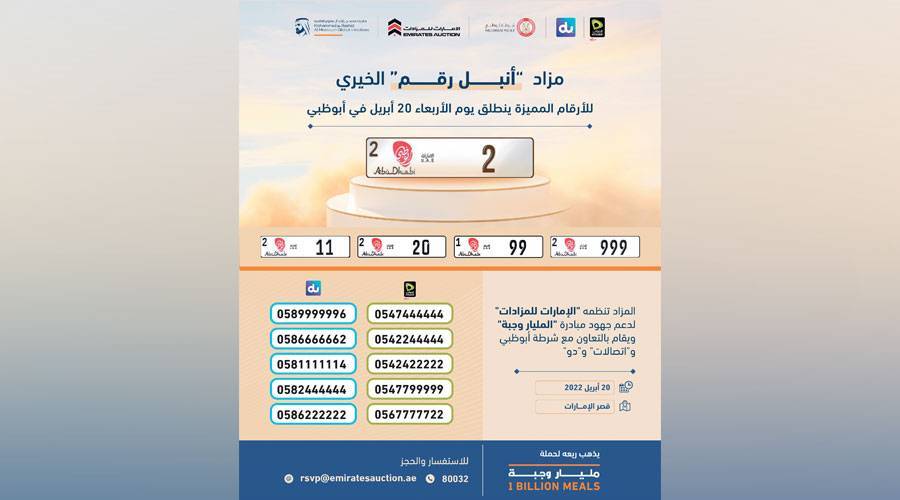 In conjunction with “Zayed Humanitarian Day”, the “Noble Number” charity auction will be launched on Wednesday, April 20, 2022 in Abu Dhabi, to support the efforts of the “Billion Meals” initiative, the largest in the region, organized by the “Mohammed bin Rashid Al Maktoum Global Initiatives”, by allocating its income to provide food aid to the needy and the poor, especially vulnerable groups of children, refugees, displaced persons and those affected by crises and disasters in 50 countries.

A group of businessmen, charitable and humanitarian pioneers and supporters of the UAE’s relief efforts around the world will take part in the charity auction as they bid for five different vehicle license plate numbers and ten different mobile phone numbers, all proceeds from it will once again support the humanitarian goals of the “Billion Meals” initiative and address the challenge of hunger, which threatens the lives of 800 million people in the world.

The auction will take place on the evening of Wednesday, April 20, at the Emirates Palace Hotel.

The third most expensive special number

This comes after hosting a similar cycle of the “Noble Number” charity auction in Dubai on Saturday 16 April, and managed to raise Dh53 million to support the “One Billion Meals” initiative. It also recorded the sale of the third most expensive unique number for vehicle registration, worth 35 million dirhams, for the AA8 license plate issued in Dubai, and the Etisalat diamond mobile number 0549999999 fetched 5 million dirhams.

Innovation to widen the circle of charities

Charity auctions are an innovative option to expand the circle of humanitarian work by engaging humanitarian entrepreneurs and pioneers in specific initiatives such as “Billion Meals” which seeks to provide a food safety net from the UAE to those in need in the most needy areas.