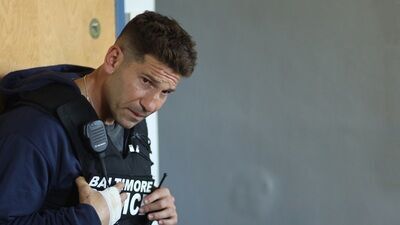 Based on the book of the same name, “We Own This City” stars the phenomenal Bernthal as Sgt. Wayne Jenkins, the Henry Hill of this group of mobsters with badges. Bernthal plays Jenkins more as a cowardly opportunist than a brilliant sociopath. Honestly, he believes that he is serving the greater good and therefore if he gets some money from a bust or even takes some drugs or weapons to sell, who gets hurt? As he becomes more and more immersed in his brand of narcissistic injustice, he takes greater risks to protect himself from him, including planting evidence and protecting violent fellow officers from him. Bernthal is the key to “We Own This Town,” capturing this man’s deep insecurity in his shifty eyes: watch the scene where Jenkins witnesses a Freddie Gray protest escalate to see the constant fear in the soul of this man. Bernthal, Simon, Pelecanos and director Reinaldo Marcus Green (“King Richard”) understand that men like Wayne Jenkins are inherently weak, the kind of people who take advantage of others to protect their own interests. It’s a fascinating performance.

Of course, it wouldn’t be a Simon project without a sprawling set. Other GTTF officers who get caught up in the corruption investigation include characters played by McKinley Belcher III, Darrell Britt-Gibson, Rob Brown, and Josh Charles, who is very effective as the guy on the team most like him. Serial killer Daniel Hersl. At the other end of the spectrum, there’s Sean Suiter (Jamie Hector), a guy Simon and Pelecanos clearly like as a cop who could have gone in a different direction if the system wasn’t so fundamentally broken. One side of the political spectrum is likely to see “We Own This Town” as anti-police propaganda, but that would be wrong because the show constantly feels like it’s trying to portray the likelihood of things like the GTTF scandal happening. when it becomes easier to do the wrong thing than to do the right thing. What “We Own This City” really captures is how police corruption doesn’t take much effort; in reality, it is more difficult to do the right thing.

Nicole Steele (Wunmi Mosaku) discovers this while investigating the case for the Department of Justice. Mosaku is a bit wasted as a character designed primarily to push the narrative forward, as is Dagmara Domincyzk as an investigative FBI agent, and I didn’t love the chronological jumble of the narrative. Simon & Pelecanos’ work can be hard enough to follow, and it’s easy to get lost in how far Jenkins has come because of how much the story jumps back in time. Of course, this is intentional, probably because they didn’t want this to feel like the growing villainy of one man and more like a web of nonstop corruption.