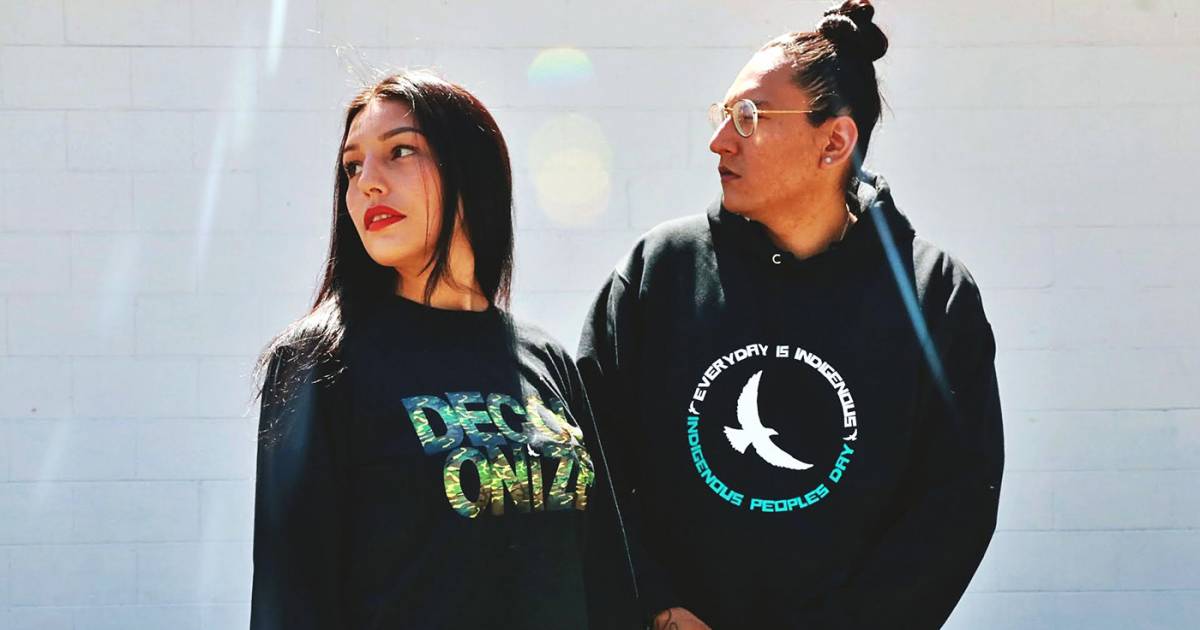 There is no shortage of anguish and despair in the world on any given day, whether it be from Russia’s unprovoked attack on Ukraine or the recent identification of 14 possible graves in residential schools in Saskatchewan. These ground-penetrating radar stops can’t really be called a “discovery” because residential school survivors and their families have been screaming from the rooftops and telling us the grim reality for generations.

Recently, there have been positive signs of change, from the Pope asking to be pardoned to the Hudson’s Bay Company transferring its downtown Winnipeg store to the Southern Manitoba Chiefs Organization.

Closer to home, there is a giant ray of hope in the form of enterprising warriors and power couple Casey Desjarlais (Nehiyaw/Saulteaux) and Dakota Bear (Nehiyaw). They are two local artists and activists who are designing clothing with messages that will resonate with the hearts and minds of Inuk, First Nations and Métis people in North America.

Originally, her clothing line was a side business. Bear and Desjarlais were busy giving talks, speaking at schools, running workshops and traveling teaching traditions learned from their elders. Desjarlais shared things she learned from her kookum (grandmother) about medicine and regalia, while Bear spent time doing creative workshops with young people. When COVID hit, they had to stop traveling and performing, but it gave them the opportunity to focus on their clothing brand.

In 2020, they changed the name of their line to Decolonial Clothing Co. and learned everything from graphic design and marketing to website creation. An early Sitting Bull design speaks to their identities as indigenous peoples. Decolonial clothing allows them to convey messages, ensuring that their visibility as indigenous peoples remains strong. It is his way of promoting decolonization as he grows his brand.

In an interview at his Burnaby atelier, Bear said his clothes spark conversation.

“As indigenous peoples, we are at the forefront of all the catastrophes in the world, such as deforestation and the water crisis,” Bear told the Straight. “Indigenous youth are solving those problems, providing solutions and recovering the knowledge of their ancestors.

“Collectively raising our voice and getting it to the masses is vital because it is at a time when it is sorely needed,” he continued. “Everyone needs to hear that, not just indigenous youth, but for everyone to feel empowered. To see what we are seeing from an indigenous perspective, from the way we see the world and the way Western capitalism has brought us to where we are today.”

Bear and Desjarlais are also willing to give back. They are about to launch Land Back Records and are in the process of building a recording studio on top of their workshop. It is a space designed by and for indigenous musicians and youth to create music and art. They say a percentage of the profits will be reinvested in their non-profit Land Back Society.

The long-term vision is to buy parcels of land to build healing huts, water filtration systems, and housing so that they can have a safe space for indigenous people to go and physically reconnect with the land. It will be another way for their music, storytelling and poetry to continue to amplify their voices.

As mentors, they integrate what they call “war entrepreneurship”. Apprentices are not simply taught how to run a business; instead, they learn a model of warrior entrepreneurship, focused on being an anti-colonial actor. The goal is to revitalize an indigenous economy and lift people out of poverty, thus lessening the dependency created by colonialism. In this way, these entrepreneurs become mentors, showing young people that they can rebuild their communities while preserving their values.

Bear and Desjarlais know that indigenous peoples fight against the colonial mentality wherever they go. They are aware that it takes a lot of courage to become agents of self-determination. They feel that they are building economic power while navigating the earth and taking care of the planet.

It’s hard work as partners, parents, mentors, and business owners who take care of their families and their community.

“It is important to ground ourselves; collectively we make things easier for each other,” said Desjarlais.

On Turtle Island, a change is taking place with young people reclaiming their spirit, names, culture, and languages, and bringing them into a modern world. At all levels, indigenous youth are reclaiming how to live their lives, and for them, it is a beautiful moment.