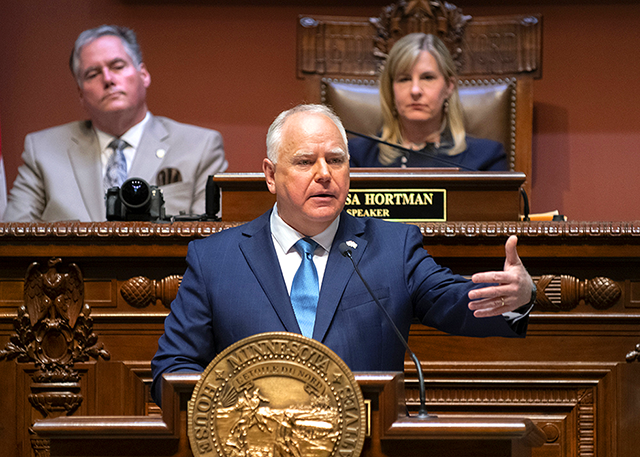 Governor Tim Walz has been governor for nearly four years, but Sunday was only his second state of the art presentation in the traditional way: in person, in the chambers of the Minnesota House of Representatives, before a joint session of the Legislature, with commissioners, elected officials across the state. , Supreme Court Justices and former Governors in attendance.

It was a return to the ritual and ceremony of an annual event that Walz did not let go unnoticed.

“I hope that everyone has felt walking in here tonight the sense of history that goes with this and the sense that we are in this together,” said the DFL governor. “I think that’s what Minnesotans feel, the feeling of coming together once again with friends, family and co-workers and doing the important things in life.”

Then, the governor tried to play on the good feelings that a return to normalcy might generate in a state capitol that remains politically divided.

The state of the state is strong, Walz said.

That’s what the headlines almost always say, especially headlines in a re-election year, especially those facing challenges that paint the state and nation as in trouble, even failing. And Walz used his nearly hour-long speech to argue that the state is succeeding but needs his legislative agenda to keep it that way.

“We may not agree on everything. And if we’re totally honest, some of us won’t agree on anything,” Walz said. “But we owe it to the people of Minnesota to try to find common ground,” citing times in the past three years when a politically divided government has come to terms.

Heading into the 2022 legislative session, this year’s speech had few surprises. For months, Walz has been touting the proposals he championed Sunday night: use state budget surpluses for rebate checks; be open to targeted tax cuts for low- and middle-income residents; fix the unemployment insurance system; awarding thank you checks to frontline workers against the pandemic.

And he reiterated a common Democratic theme, in Minnesota and nationally, that the pandemic economy helped some people and hurt others. Now, he said, with surpluses helped by unprecedented federal pandemic relief, the state should spend money on child care and health care serving those impacted by the recession.

Shortly after the pandemic began more than two years ago, Walz delivered his State of the State speech alone, at the Governor’s Mansion in St. Paul, warning of the long winter that COVID-19 had unleashed and that “stay at home” is the only vaccine in the state. Last spring, she addressed the state from her old Mankato West High School classroom, expressing optimism that real vaccines would allow Minnesota to win the fight.

Those speeches are now time capsules of how the state and nation’s response to COVID-19 went from a show of unity to a source of division. Walz recognized those divisions and avoided them. He praised her Health Commissioner, Jan Malcolm, but kept her comments about her focused on her leading an effort to find and deploy health workers. He praised Minnesota National Guard Adjutant General Shawn Manke for deploying his troops to vaccination centers and nursing homes instead of his actions during the riots following the killing of George Floyd in Minneapolis.

“The pandemic has caused ruptures between all of us. It has caused fissures that seem insurmountable,” Walz said. “My commitment is to listen and try to heal those divisions because the goal of everyone in this body and the goal of all public servants is the health and safety of all Minnesotans.”

One of those divisions is over public safety. The unrest that followed the murder of George Floyd and the rise in violent crime in the Twin Cities have provided Republicans with a potent campaign issue, and the GOP’s current criminal justice proposals lean toward policing and punishment. The DFL is leaning more heavily on responses that address what they see as the root causes of crime, including poverty, poor housing and easy access to guns.

Walz touted working with nonprofit community organizations trying to intervene with youth and gangs. “This is not one of those issues where just pointing out the problem is enough. We need concrete solutions with measurable results that keep Minnesotans safe,” he said.

Following a technique first used by former President Ronald Reagan and now an expected cliché, Walz used faces in the gallery to personify his talking points. There was the head of the state nurses union when he talked about hero checks, a resident and her son who changed their minds about the value of vaccines, a couple of small business owners when they asked for the unemployment insurance fix, a worker of home health care, and the mayor of the town of Taopi, in southern Minnesota, which was hit by a tornado this month.

“We’re brave. We are resistant. We are strong and diverse,” Walz said at the end. “We can argue, but I think we understand the blessings that have been given to us. No matter how divided you feel at times, we are still connected.”

As is also to be expected in these democratic rituals, the Chief Executive’s words were praised by his party and questioned by the other. House Minority Leader Kurt Daudt said Walz said his agenda was ambitious, but he needed to be more ambitious.

“We could cut taxes by 10 percent across the board and still meet the demands of state government,” said Daudt, a Crown Republican, referring to the GOP’s plan for a permanent tax rate cut on income and an end to all taxes on social security benefits. He called Walz’s refunds minuscule.

“I would challenge the governor to be more ambitious,” Daudt said. “With the resources we have, we could reinvest in Minnesotans who will grow our economy and we can grow our state.”

Daudt also criticized the governor’s public safety proposals that will not address rising crime rates. “It does nothing to hold criminals accountable or recruit more people to enforce the law or support our current law enforcement,” he said.

Sen. Gary Dahms, R-Redwood Falls, replaced Senate Majority Leader Jeremy Miller, who did not attend the speech. He said that the educational gaps in the state between white and students of color are not solved with more money but with reforms in the way education is delivered.

The current education budget passed last year is at an all-time high, something Walz also bragged about. “We are not changing the achievement gap. We’re not changing much of anything. However, we continue to bring in new money,” Dahms said.

Although legislative DFLs are not fans of Walz’s refund check proposal, preferring child care and housing tax credits and other methods to target savings at low-income Minnesotans, House Speaker of Representatives, Melissa Hortman, said that the governor’s speech was in favor of workers, family and family. -little boy. “Democrats are united behind their agenda items,” she said.