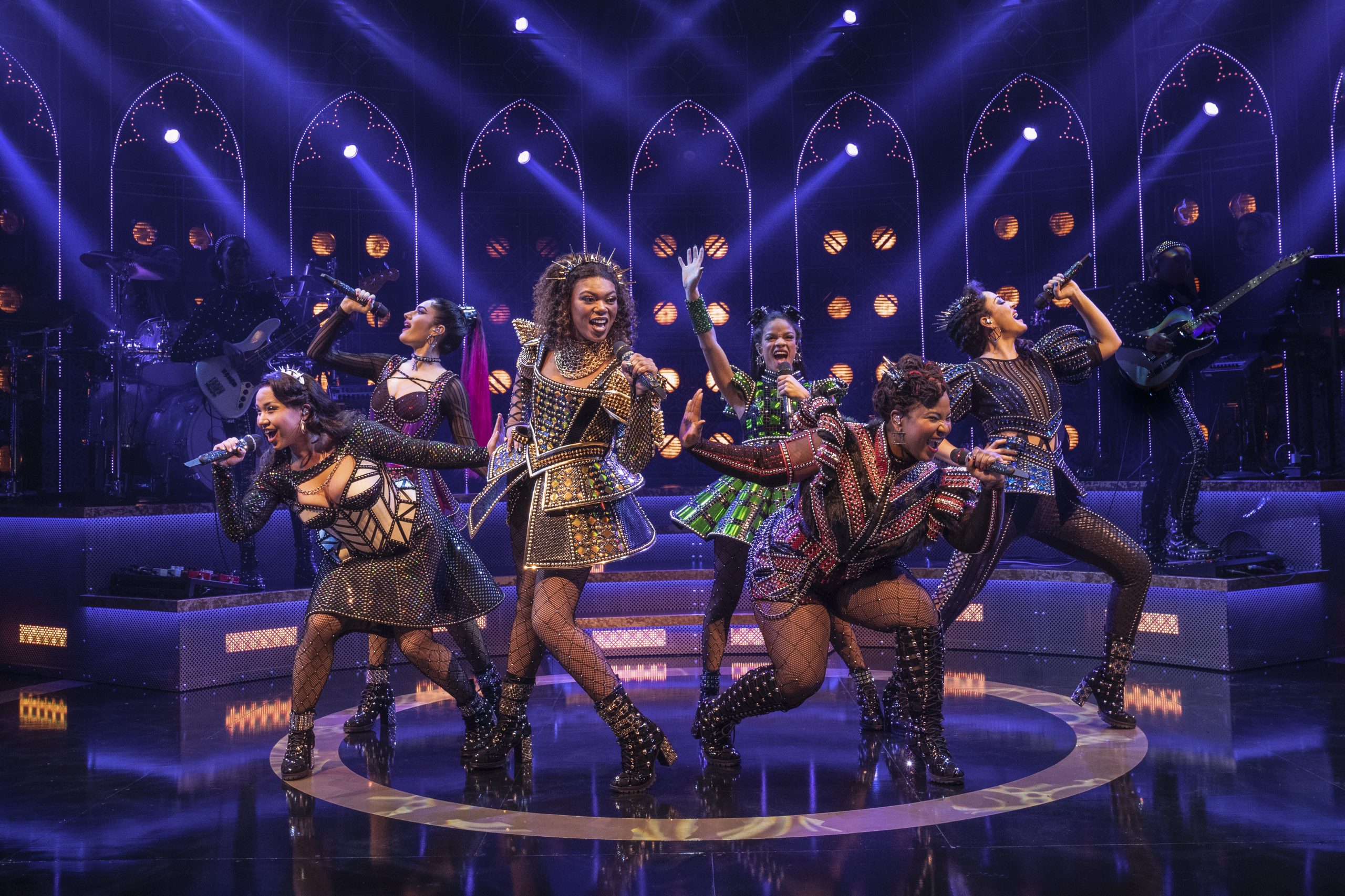 After starting life at the Edinburgh Fringe Festival in 2017, it then had its North American premiere at Chicago Shakespeare in 2019 before heading to Broadway, Toby Marlow and Lucy Moss’s edgy rock musical (directed by Moss and Jamie Armitage) about the most famous sextet of Spouses in history returns for a three-month run at the CIBC Theatre. (Or nearly half the length of Henry VIII’s shortest marriage. That would be Anne of Cleves, the second “divorced” in the famous “divorced, beheaded, dead, divorced, beheaded, survived” rhyme, which begins to the show.)

Six is a blast, mainly because the creators know exactly what they’re looking for and are committed to doing it with light-hearted spectacle and glam-rock swagger. But they’re also mixed with just enough poignancy to remind us that even though these women lived and died (at least two in horrible ways, look at that rhyme again) nearly 500 years ago, they were real people, doing the best they could. . she might in a system where being queen, let alone minor nobility before marriage, didn’t mean much. Particularly when you’re married to a capricious, petulant son with absolute power over you, which is never fun.

This is not a well-behaved PBS documentary by any means. The framing device for this 80 minute game is that the queens are going to tell us their stories in song as a way of fighting over who had the worst time. (Anne of Cleves can barely keep a straight face pretending to be sad about her fate; more on that later.)

But as the Tudor divas break their numbers (and occasionally hit each other), they become less Mean Girls, more Spice Girls. That is, each has its own identifiable markers. (I think Cleves, with her love of hunting and croquet, could be Sporty Spice, and Catherine of Aragon is definitely classy, ​​being the daughter of the King of Spain and all; yes, I realize I’m missing a Spice in this analogy.) But we get enough background to sympathize with each in turn, and see them realize at the end of the show that history has gone awry. They are not remembered only for their association with Henry VIII; the only remembered for them.

This Sisterhood of the Traveling Crown provides each of the six women in the show (backed on stage by four incredible musicians, the Ladies in Waiting) with a knockout solo. Perhaps the most heartbreaking is Jane Seymour’s (Jasmine Forsberg) “Heart of Stone,” the one that gave Henry his much-desired male heir but died less than two weeks later. The popular imagination has Jane as the demure tragic woman, the only one Henry truly loved, perhaps because of her untimely death (and not at his hands). And maybe that’s true; but as she defiantly proclaims: “You can build me up, you can tear me down / You can try, but I’m unbreakable / You can do your best, but I’ll stand the test / You’ll find I’m unbreakable.”

So okay, no sonnets from Shakespeare. But direct, poignant and, played by Forsberg (taking on a role played by Chicago’s Abby Mueller in Chicago Shakes and on Broadway), a retort to the idea that her strength lies only in her submission. Jane knows what she has signed up for and, to quote a line from the Anne Boleyn song, “I’m sorry, I’m not sorry.” Except for not being able to see her child grow up. (Edward VI died at age 15, so maybe that was a blessing.)

Catalina de Aragón (Khaila Wilcoxon), who was married to Enrique the longest, performs “No Way” with all of Effie’s searing passion in dream girls declaring “And I tell you I’m not going”. Storm Lever’s Anne Boleyn combines effervescence with regret in “Don’t Lose Ur Head,” while Didi Romero’s Katherine Howard describes the lurid attentions of much older men who have followed her since she was just a teenager in “All You Wanna Do”.

I’m an avowed Cleves fan, and like the Chicago Shakes production, my favorite number remains “Get Down,” sung confidently and finger-snapping by Olivia Donalson. Rejected by Henry for not matching the pleasant face in his Hans Holbein portrait (Henry apparently had no mirrors in his palaces or was actually a vampire), Cleves accepts the offer to end the marriage and continue to live in England on her own. House. palace–not married, not bought, without boss. Oh, and it saved me from having to, you know, sleep with the cranky guy with the stinky leg ulcers.

He knows he has the best offer in the bunch and can’t resist picking on the others. “I died of the plague,” she says at one point. “In fact?” asks one of the other queens. “Nah, just kidding. My life is amazingDonaldson’s Cleves laughs.

But it is Gabriela Carrillo’s Catherine Parr (along with the first Catherine, probably the best educated of the six) who links it with “I Don’t Need Your Love.” In the end, married four times, Parr directs the song to the man she gives up for Henry, Thomas Seymour, who ended up being her last husband. There’s definitely a whiff of “Who lives, who dies, who tells your story” from Eliza from hamilton, as Catherine recites all the things she did (writing, promoting women’s education) that had fucking to do with being Henry’s last wife. But it is also an invitation to all wives to stop being “fixed as one of six” and to “rise above”.