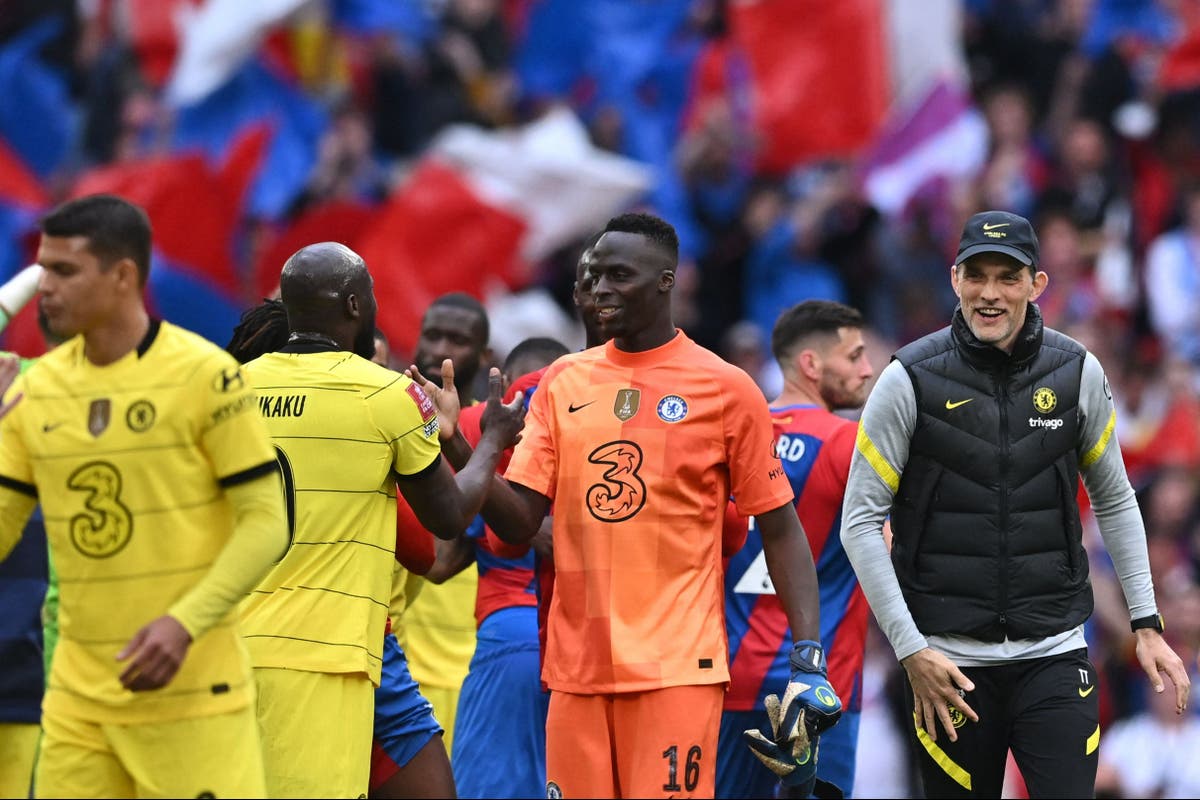 It means a repeat of this season’s Carabao Cup final, which Jurgen Klopp’s side won after 22 penalties ultimately separated the two teams.

So this 2-0 win against Palace gives Tuchel the chance to take some quick revenge and, who knows, deny a clean sweep to quadruple-chasing Liverpool.

Klopp’s team will no doubt have to do it the hard way if they are to complete the unprecedented feat of lifting all three domestic trophies and the Champions League as well.

Meanwhile, the victory keeps Chelsea’s season alive, as well as ensuring that Tuchel remains a fascinating subplot in the Klopp-Pep Guardiola narrative.

While Liverpool and Manchester City are on course to determine the two biggest prizes in the Premier League and the Champions League, Klopp will have had to beat Tuchel in both domestic cups if he is to achieve his ambitions this term.

That, in itself, should serve as a reminder of just how close Chelsea are to the undoubted leading pair in English and possibly European football.

Tuchel is convinced his team would still be in the title conversation were it not for injuries and the impact of Covid midway through the campaign.

It’s up to him to prove it next season, but his performance in almost every other competition adds weight to his claim.

The European Super Cup and the Club World Cup have already been won this season.

The Carabao Cup was lost on penalties, while their defense of the Champions League crown ended in harrowing circumstances against Real Madrid on Tuesday night.

Now Tuchel has extended his record of reaching every possible domestic cup final since taking over at Stamford Bridge last year, with this latest win.

It is the third consecutive year that Chelsea have reached the FA Cup final; now they need to complete the job after losing in each of the last two years.

This was not pretty, and the score flattered Chelsea.

It was also cruel for Palace, who had presented their opponents with numerous problems, requiring Edouard Mendy to produce a marvelous save to deny Cheikhou Kouyate with the score level.

For long periods they lacked energy and inspiration, and the question was always how they recovered from the strain and emotions of their midweek Champions League exit.

A Wembley semi-final gave them no chance to feel sorry for themselves, especially against a Palace side whose supporters treated the occasion like a final.

Blue and red flags filled the end of the Palace, with flares launched before the first whistle adding to the atmosphere.

Could Chelsea fans, let alone the players, match that expectation?

Palace were ready to take advantage of any mistakes with Wilfried Zaha, Jean-Philippe Mateta and Eberechi Eze threatening at half-time.

Only Andreas Christensen’s alertness kept them at bay in the first half, while Kouyate’s volley nine minutes before the break was brilliantly deflected by Mendy.

Chelsea offered little in response, with a Kai Havertz dive on the edge of the box earning the German a yellow card and denying himself a clear run on goal.

Kouyate also had the first real chance of the second half when he soared higher than anyone else to find a corner, but headed wide with Mendy pinned on the spot.

That mistake loomed large when Chelsea took the lead in the 65th minute, with a touch of fortune that proved decisive.

When Tyrick Mitchell turned the ball over in his own half, Chelsea surged forward.

Havertz squirmed in the box before lobbing a hopeful ball across the goal.

Marc Guehi’s excellent back leg inadvertently deflected it into the path of substitute Ruben Loftus-Cheek, who fired a shot into the top corner that was just wide of Joachim Anderson.

It’s debatable whether Jack Butland would have been able to stop him without that touch, but it was a by-play case for Chelsea and against Palace.

The game ended in the 76th minute when Mason Mount added a second.

Havertz’s lofted ball was controlled by Timo Werner with his chest. He fired Mount, who returned it to him.

Werner then showed composure to wait for his chance to feed Mount into the box and the midfielder slid a shot past Butland.

Chelsea could have extended their lead later when Romelu Lukaku came off the bench and hit the post with an open bow in front of him.

By then the day’s work was done. Now he needs to complete it against Liverpool.