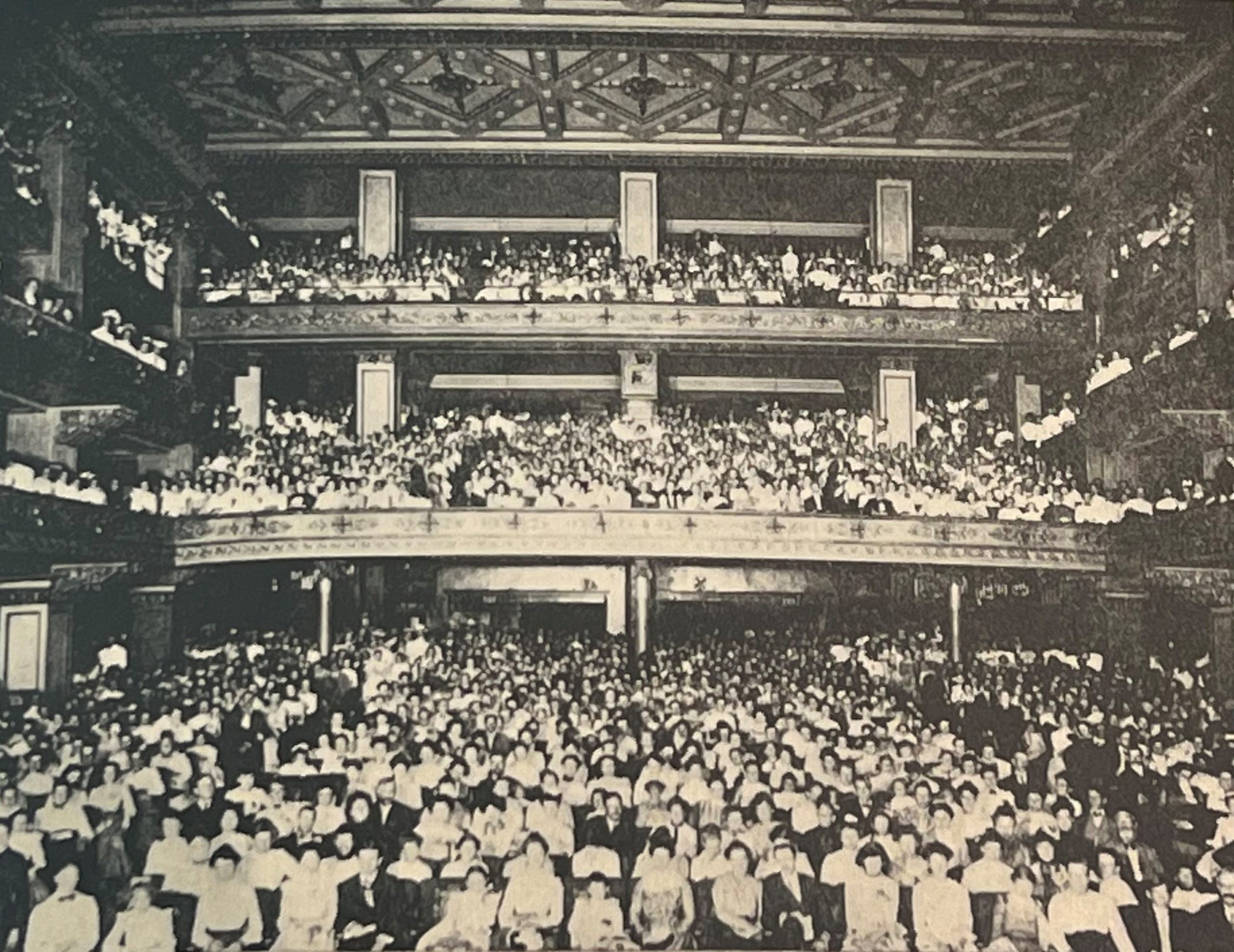 Last August, I met with Jacob Harvey just as he was taking over as the new (and first) Managing Artistic Director of Theaters for the Fine Arts Building. At the time, he noted that with the loss of the Royal George as a midsize rental house, the soon-to-be-remodeled Studebaker Theater at Fine Arts might be a good option for “somewhere in between where a little tour or an out-of-town production and help fill that void.”

Earlier this week, I caught up with Harvey in person to see what’s new at Studebaker. While giving me a tour, the team at roller skatesa new musical by Christine Rea and Rick Briskin described as “Fat satisfies hair spray with a pinch of Xanadu” (and starring american idol alumni Diana DeGarmo and Ace Young) hammered away on set. (The show starts previews next week.) roller skates it was six days away from opening at the Royal George before the COVID-19 lockdown of 2020. Then the Royal George itself, a commercial rental house with four places across Halsted from the Steppenwolf campus, closed for good in 2021 after of almost 37 years of operation.

So that’s one item on Harvey’s wish list. But Harvey and the rest of the Fine Arts team still have big plans. Just before we met, NPR announced that the popular question-and-answer show Wait wait . . . Do not tell me! he left his old home at the Chase Auditorium in South Dearborn and took up residence at the Studebaker; the first live taping there is scheduled for June 16. (The Studebaker, which used to have 725 seats, now has between 600 and 650 seats; part of the renovation involved expanding legroom on the balcony seats.)

Erica Berger of Berger Realty Group, which oversees the Fine Arts Building (she is the daughter of the late real estate mogul Bob Berger, who purchased the building in 2005), was the catalyst for the Wait wait blow. In an email, he explained: “Nearly three years ago, our late building manager received a cryptic call about an NPR show interested in moving into our space. Knowing that he had a history with NPR as a founding member of its young Generation Listen board (as a journalist and media executive), he called me; I immediately booked a flight back to Chicago to attend the meeting. When I walked into the room, to our surprise, I knew the Senior Manager of Operations from Wait wait . . .Colin Miller. . . . Like a wink from the universe, the synchronicity was hard to ignore.”

Renovations at the Studebaker actually started before Harvey took over in 2014, but during our tour, he notes that a big part of what they’ve been focusing on is beefing up the technical infrastructure. “The most impressive but not visible part of the renovation is all the audio, video, lighting and electricity. Berger Realty Group put some money into it as a proof of concept about six years ago, but it hasn’t really been a live theater since the late ’70s.” From 1982 to 2000, the Studebaker housed the Beaux Arts movie theaters. Since the Bergers took over the building, groups such as the Chicago Opera House and the Chicago Jazz Orchestra have performed there.

Harvey asked playwright Tanya Palmer, a former producer and director of new play development at Goodman and now assistant dean and executive artistic director of Northwestern’s theater program, to investigate the tangled history of the Fine Arts Building and create a line of weather. The story begins in 1883, with the purchase of land on Michigan Avenue by the Studebaker brothers of South Bend, with the aim of creating a branch in Chicago for their carriage business. Architect Solon S. Beman designed the building, which originally opened in 1886 and gradually expanded over the years, until the building assumed its current footprint in 1898. It quickly became a center for artists, teachers, musicians and the “small theater” movement of the early 20th century. Today, it remains home to many creative endeavors, including the Chicago International Puppet Theater Festival, whose workshop overlooks the charming little open-air Venetian Courtyard located in the center of the building on the fourth floor.

Studebaker Hall itself opened in 1898 with a piano recital by Fannie Bloomfield-Zeisler, but business in the classical world was slow, so building manager Charles S. Curtiss convinced the Studebakers to convert it. in a theater. In 1910, the Studebaker hosted the legendary Sarah Bernhardt for a two-week repertory engagement, featuring her signature roles in Camila, PhedreY Joan of Arc. (It’s unlikely any of those performances involved roller skating.) Other big names to grace the Studebaker stage include Eartha Kitt, Henry Fonda, Peter O’Toole, Rex Harrison, an old Claudette Colbert and a young Martin Sheen.

Updating technical bells and whistles doesn’t just help NPR (Harvey showed me the private tech booth for Wait wait . . ., right next to the spacious main booth for Studebaker shows), but also improves the ability to stream live performances, a practice that has become even more important since the COVID shutdown. Harvey points out that there are now three cameras installed on the balcony that provide that capability.

The Studebaker is the crown jewel for Beaux-Arts performance venues, but smaller groups will also soon have potential performance space once the old Playhouse Theater next door completes its renovations. That place, renamed Carriage Hall as a nod to the building’s origins, will function as a multidisciplinary and flexible space for events. Harvey notes that there are ongoing discussions with local theater and dance companies about the possibilities of establishing residencies for that space.

All of these plans reconnect the Fine Arts Building and its theaters with the vibrant history discovered by Palmer. Studebaker’s physical renovations, including art deco-style wallpaper, also bring a throwback feel alongside the new technical upgrades.

But Harvey says he remains committed to the vision of Fine Arts as a downtown nonprofit arts incubator. And he hopes that both the Studebaker and the Carriage House, as well as other spaces in the Fine Arts Building (including the second-floor bookstore, Exile in Bookville, run by Javier Ramirez and Kristin Enola Gilbert and successor to the old Dial Bookstore) can provide an integrated approach to giving Chicago artists of all kinds access to audiences and resources.

“How does a for-profit entity function as a mission-driven organization, where we can act in service to the community, can we help build community?” Harvey asks. “We can work it out on our own terms as to how we can create the most impact and be the most beneficial, while also opening the doors as wide as possible.”

Earlier this week, Court Theater found out that they are joining the growing list of Chicago theaters honored with the prestigious Regional Theater Tony Award, which is selected by the American Theater Wing’s Tony committee, based on recommendations from the American Theater Association. Theater Critics. . The award will be presented during the Tony ceremony at Radio City Music Hall on June 12 (although in recent years, the regional award has not been part of the main broadcast).

The regional Tony honors companies outside of New York City (well, off Broadway too), and it comes with a $25,000 purse, as well as bragging rights. Court is the sixth Chicago company to win the award. The others are: Steppenwolf (1985), Goodman (1992), Victory Gardens (2001), Chicago Shakespeare (2008), and Lookingglass (2011). By my calculations, that makes Chicago the city most recognized by the Tonys.

This weekend, Court opens a revival of August Wilson’s two trains running (the 1960s entry in the late playwright’s century cycle of plays on African-American life in the 20th century), directed by artist-in-residence Ron OJ Parson. The company’s 67-year history began with the outdoor amateur summer theater at the University of Chicago produced by Marvin E. Phillips and Paul Sills (the latter the original director of Second City). Its permanent home on the UC campus was built in 1981. In 2013, current artistic director Charles Newell started the Center for Classical Theater at the university to deepen Court’s ties to the academic and research resources available at UC.

In a press release, Newell said: “Since I began on the Court in 1993, it has been the joy of my life to be a member of this vibrant and fertile community. This award belongs to you. It belongs to the Court community, the South Side community and the University of Chicago community. It belongs to all those who have struggled to see themselves on stage and to all those who have been moved by the power of storytelling. That’s why we do what we do. Any recognition for that, let alone recognition of this caliber, is a lovely and exciting gift.”