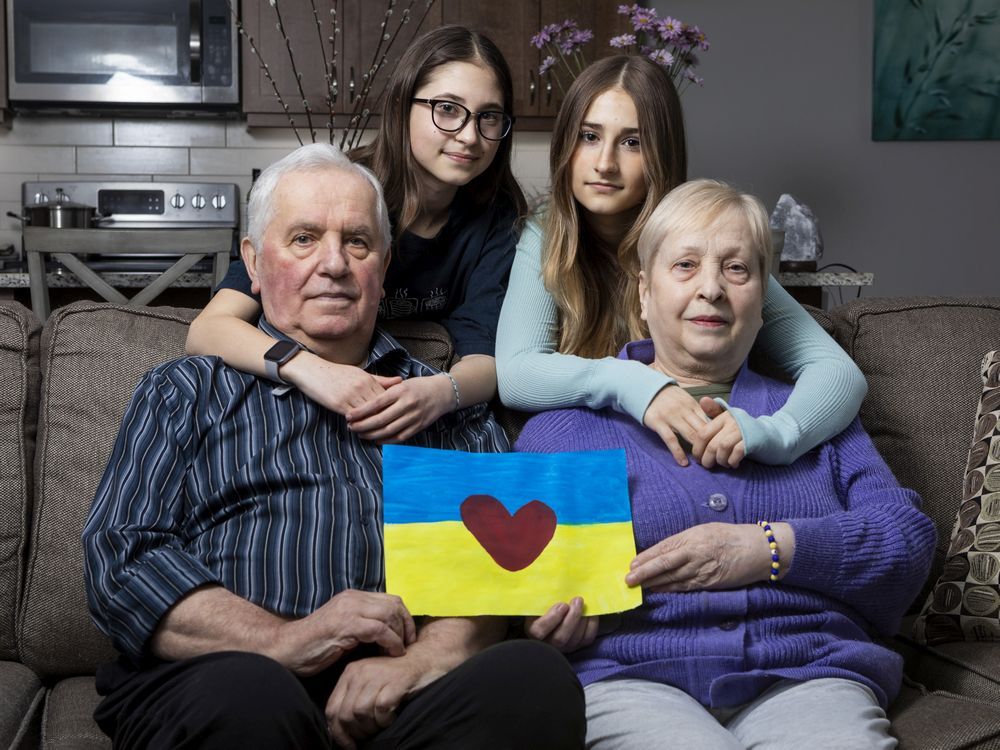 It was by chance that Olga and Valerii Lazarenko were reunited with their family in Ottawa just days after they fled Ukraine in early March.

The couple waited out the first two weeks of the war in their hometown of Chernivtsi, in southwestern Ukraine, about 30km from the Romanian border.

Luckily, they had previous travel visas to Canada to visit their daughter Lyudmyla, son-in-law Yuriy Poslavskyy, and granddaughters Emily and Maya.

“There was an anticipation of what was going to happen,” Poslavskyy said of the war. “We talked to them for quite a while and said, ‘Maybe you could come over and spend some time with us and camp here.'”

Translating for Olga, she said: “It was terrifying. For all those years, Ukraine has lived under the threat of Russia.”

Some of those fleeing Ukraine to a Romanian border point were stuck in traffic jams for days. So the Lazarenkos called a taxi.

“They waited a bit in his apartment, just because the border areas were overcrowded with cars,” said Poslavskyy, who was able to book a hotel for them in Romania. “People who were walking had priority. So if you could cross the border on foot, you had priority.”

The couple crossed the border on March 7 and stayed in Romania for three days. With their visas in hand, they were able to board a plane headed from Bucharest to Paris and on to Montreal.

The Lazarenkos are among more than 5 million Ukrainians who have fled the country since Russia invaded on February 24.

The largest number of refugees, more than 2.8 million, have fled to Poland, according to figures released this week by the Geneva-based United Nations High Commissioner for Refugees. More than 750,000 more have fled to Romania, 471,000 to Hungary, almost 343,000 to Slovakia, 24,000 to Belarus and some 550,000 to Russia. Even tiny Moldova, with a population of around 2.6 million, has absorbed nearly 430,000 refugees.

Half of the refugees are children, according to the UN. The war has torn families apart because the Ukrainian government requires that men between the ages of 18 and 60 not leave the country.

Romania was receptive to the rush of refugees, Poslavskyy said.

“All of these countries were doing an excellent job of processing people, and they had the logistics figured out. They set up food tables. You could have a coffee while you wait to cross the border,” she said. “It was so well organized that they were given a SIM card for their phone and they had a local connection.”

Of course, there were some mistakes. After some confusion, the Lazarenkos didn’t know how to use the SIM card, the family in Ottawa got in touch by calling the hotel.

Others in Poslavskyy’s extended family faced greater obstacles. His aunt, his cousin and the cousin’s 11-year-old son, along with a friend with two children, had loaded a car and left them waiting for days in the traffic jam leading to the Romanian border.

“They were trying to save gas. But it was February and it was cold, like here. Sometimes they would freeze,” she said.

“People were nervous, but they were still trying to help each other. My cousin is having some car trouble. She knew about the problems before she left, but she found a mechanic to fix things. Getting spare parts was beginning to be a problem in Ukraine.”

His family members finally arrived in Bucharest. The car was still having problems, but a mechanic from Romania fixed it for free and the people of Bucharest offered them shelter.

All of Poslavskyy’s relatives have been accounted for. One even got help vaccinating a cat she refused to leave behind.

A family is staying in a hard-hit rural area near Mariupol, camping until the situation calms down. They have supplies, but no electricity.

“It was difficult at first because they were isolated. They now have access to a generator to recharge the phone and spread the word,” said Poslavskyy.

The big question for Ukrainians looking to make Canada their temporary home is how long the war will drag on. Although they are seeking refuge in Canada, they do not fall into the legal category of “refugees”.

The federal government introduced an emergency travel authorization and expedited temporary residency program intended to allow Ukrainians to get to Canada as quickly as possible. Some provinces, including Ontario, have announced plans to extend health care to visitors.

A spokesman for Immigration, Refugees and Citizenship Canada said it is impossible to say how many Ukrainians will eventually come to Canada under these measures. Between January 1 and April 10, some 16,600 Ukrainians arrived in Canada.

Canada received more than 140,000 temporary resident visa applications between March 17 and April 12, but only about 46,000 applications were approved.

Olga Lazarenko said that her friends and her apartment in Chernivtsi are safe. The city has been largely undamaged so far, but Ukrainians from other regions are flocking to the city because it has been relatively unscathed.

Granddaughter Maya, 11, remembers previous visits from her grandmother before the pandemic.

“We would go to a nearby park and have a lot of fun,” he said. “I am very happy that my grandmother is here.”

The family watches broadcasts from Ukraine, but the uncertainty has been mentally draining, Poslavskyy said.

“You don’t know if you’re leaving everything and starting a new life, or if you’ll be able to come back.”