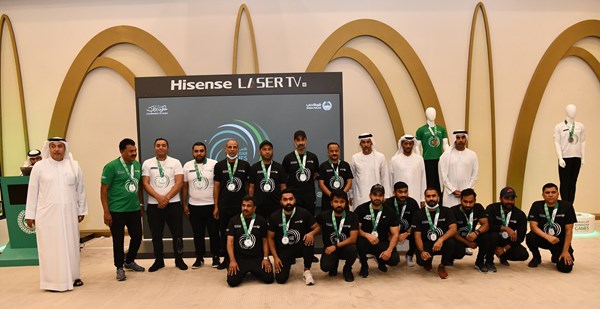 Dubai (Etihad)
His Excellency Lieutenant General Abdullah Khalifa Al Marri, Commander in Chief of the Dubai Police, witnessed the conclusion of the “Dubai Police Ramadan Games” championship, at the Officers Club, in the presence of Khalid Al Awar, Director of the Sports Events Department. at the Dubai Sports Council, Major General Ahmed Rafie, Deputy Commander-in-Chief for Administrative Affairs, and Major General Ali Atiq Bin Lahej, Director of the General Department of Airport Security, Brigadier Rashid Khalifa Al Falasi, Deputy Director of the General Department for Organizations, Facilities and Emergency Security, Colonel Ali Khalfan, Acting Director of the General Department for Community Happiness, Ahmed Al Marzouqi, Senior Executive Vice President and General Manager of Retail Banking at National Bank of Dubai, and various officials employees and participants in competitions.
His Excellency Lieutenant General Al Marri, during the event organized by the Department of Sports Affairs of the General Department of Community Happiness, congratulated the winners of the various individual and group competitions that took place throughout the holy month of Ramadan, and praised the effort made During the competitions, emphasizing that the Ramadan championship is framed by the enthusiasm of the leaders, the Dubai Police General organizes several sporting events that contribute to raising the level of physical fitness and promoting a healthy life, and make of sport a lifestyle for employees and participants.
For his part, Colonel Ali Al-Mansoori confirmed that this year’s Ramadan Games Championship witnessed great competition between the contenders in both the men’s and women’s parts, indicating that the Ramadan Games in Dubai Police will be will become a mini-Olympiad that coincides with the blessed month of Ramadan every year, praising at the same time the efforts of all the participants in the different tournaments and the high level of competition they showed.
For his part, Lieutenant Colonel Abdul Basit Ali, director of the Department of Sports Affairs in the General Department of Community Happiness, confirmed that the Ramadan tournament includes 22 different competitions for women and men, including quintet football, snooker, beach volleyball , cricket, crossfit, archery, fitness challenge and padel Tennis, mile run, cycling, chess, stationary rowing, swimming, physical strength, road races, stationary rowing, fitness, shooting.
Lieutenant Colonel Abdul Basit Ali noted that the number of participants in the Ramadan games amounted to 1,094, including 928 from the male component and 166 from the female component, while the number of winners in all competitions reached 216 competitors and 94 specialized judges. . conducted the arbitration proceedings.
He indicated that the number of collective teams that participated in the competitions amounted to 92 teams, while the number of hours of various sports reached 186, and the number of matches reached 185 matches, indicating that throughout the day there were 24 media coverage of the activities of the competition. the month of Ramadan, and the number of organizers reached 57.
Lt. Col. Abdul Basit Ali confirmed that the Ramadan Games activities also included training programmes, which amounted to 280 hours of training involving 112 participants, and included fitness programs at the Officers’ Club and a mountain bike in Mushrif Park.