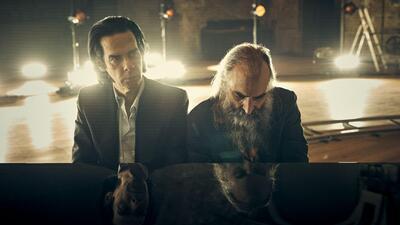 That’s certainly how I feel about Andrew Dominik’s stunning “This Much I Know to Be True,” his second film about the life and work of Nick Cave after the moving “One More Time with Feeling” in 2016. The director of “The Assassination of Jesse James by the Coward Robert Ford” and “Killing Them Softly” doesn’t just film performances by Nick Cave and Warren Ellis in this excellent movie—he almost turns the entire affair into a religious service. After all, he opens the film with a long segment in which Cave shows off pottery with religious themes and intercuts a few of the songs with Cave speaking about his work with The Red Hand Files, a way that the singer/songwriter can communicate directly with his often emotional fans. These interludes frame Cave and Ellis as more than just performers—they’re tapping into something eternal, pure and true.

Filmed over five days at Battersea Arts Centre, “This Much I Know to Be True” sees Cave and Ellis preparing for a 2021 UK tour and performing songs from the amazing ghosteen and carnival for the first time. Dominik places the pair in a large room that really allows Cave’s incredible voice to echo and then sends cameras around it on tracks, flowing in and out of their expressive faces with the music. Lights illuminate background singers or musicians only as needed, and the experience becomes remarkably intimate and incredibly moving. He might not agree, but I feel like every song that Nick Cave has written since the death of his son in 2015 has at least partially been influenced by that life-changing event. There’s such vulnerability in his recent work by him that has revealed new depths to one of the best songwriters of his generation.

The description for “This Much I Know to Be True” includes the phrase, “as they nurture each song into existence,” which I love. There’s a sense of care in both the musicianship and filmmaking here—the feeling that this is way more than just a rehearsal. It’s an emotional, powerful experience that I can’t wait to see again.

Process is also a key part of the excellent “The Return of Tanya Tucker,” directed by Kathlyn Horan. The filmmaker captures the production of Tucker’s 2019 comeback While I’m Livin’produced and co-written by Scooter Jennings and the stunningly talented Brandi Carlile, who makes several references to what Rick Rubin did for Johnny Cash with the American Recordings releases. Carlile, herself an increasingly remarkable songwriter, wants to do the same for one of her icons of ella, Tanya Tucker, who had n’t recorded new material in 17 years when she was approached to do this one by what ella was basically a total stranger. Horan sometimes feels like she’s bitten off a bit too much here, weaving in some bio-doc elements to fill in the background of Tucker, and following the album all the way from the first meeting between Carlile & Tucker to its Grammy-winning success. I personally could have just watched the recording and been satisfied because everything that really matters here—legacy, collaboration, creativity, reclamation—is right there in Tucker’s quavering voice and Carlile’s supportive gaze from her.