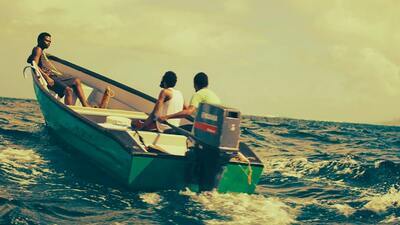 “Chee$e” takes after coming-of-crime stories like Martin Scorsese’s “Mean Streets” and Hype Williams’ “Belly,” showing how a young man can run into the abyss of criminal activity. Akil Williams plays Skimma, a cheesemaker in Trinidad who helps him crack a scheme to smuggle weed throughout his village, by baking it into the cheese. The cops won’t detect it, even though they’ll notice the smell of a stinky van, and for some scientific reason it adds even more potency to the product.

Skimma is motivated to make this money in part when he finds out that his girlfriend Rebecca (Yidah Leonard) is pregnant, to the disgust of her fellow churchgoers. “Chee$e” also focuses on how she deals with the pressure of her faith community, later trying to get a curse put on Skimma, during the script’s tumultuous course of close calls with the police, bad luck, and eventually, do-or -die drug deals.

Marcano seemingly throws every style shot into the mix when telling a story that already has colorful characters. It becomes clear, and exciting, how alive many sequences are just from their editorial rhythms, along with the wall-to-wall music and the color. This is what filmmaking can be—it can be intoxicating, disorienting, toe-tapping, transporting. The only downfall about it really is that such momentum makes you all the more aware when the blocking is lacking, when it’s just two characters standing and talking at each other.

“Chee$e” leads with style, but it’s not only about experimenting, though there’s plenty of that. Williams’ lead performance helps ground the movie, and making Skimma’s hopes and fears resonate just like Marcano’s presentation of them. The sudden, confident ending practically took the wind out of me, and left me hungry for whatever project, TV or film, puts Marcano in a director’s chair next.

Making its world premiere in the festival’s Midnighters section, “Hypochondriac” is the kind of horror movie that has a few curious ideas but not enough to fill a feature. Written and directed by Addison Heimann, it begins with a title card saying “based on a real breakdown,” which is a funny and curious note to start on. But from here it becomes a flat character study of one man, Zach Villa’s Will, dealing with trauma from his mentally ill mother de ella (Marlene Forte), and the memory of her de ella trying to choke him to death as a child. She now appears to him in different, overwrought hallucination sequences, or as the snarling voice on the other end of a voicemail. In his dire state of him, he’s also afflicted by images of a monster, a heavy-handed metaphor that needs no explaining.