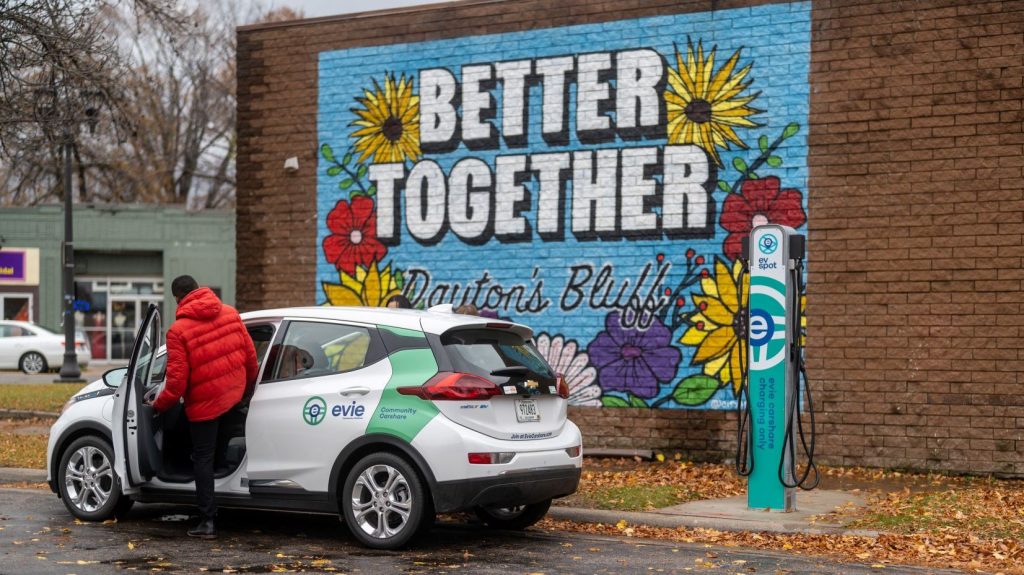 The cities of St. Paul and Minneapolis have officially launched an all-electric car-sharing network with the nonprofit HourCar, which will oversee operations.

The Evie Carshare network encompasses 171 vehicles parked at 70 car charging stations called “EV Spots,” which can be accessed through a series of monthly plans tailored to commuters, long-distance, student, low-income or occasional.

The hope is to reduce carbon emissions by convincing more residents to forgo the family car and rely on the options of walking, cycling or public transportation, knowing they will still have access to the car when needed.

Carter joined Minneapolis Mayor Jacob Frey, US Senator Tina Smith and other officials at the St. Paul Union Depot Center on Friday to introduce the $12.75 million network, which received strong financial support from both cities. , the US Department of Transportation, the US Department of Transportation, Energy, Xcel Energy and the Metropolitan Council.

The vast majority of car-sharing stations are located in or near communities of color and along transit routes, officials said. That includes 10 neighborhoods that previously didn’t have carpools.

The 70 EV Spots will include divided charging spaces between Evie and personal vehicles, as well as fast charging at 12 locations, most of them near freeway exits to accommodate longer trips.

Smith said that given the growing impacts of climate change on the environment, economy and daily life, climate action was overdue. “This project is building the infrastructure of a clean and green economy,” he said. “The reality is that we are in the midst of a climate crisis that threatens our economy…our way of life.”

Frey added: “We’re going to expand the number of charging stations, the number of vehicles in the fleet, because to be honest we don’t have a choice right now.”

There is more information online at EVSpotNetwork.org.