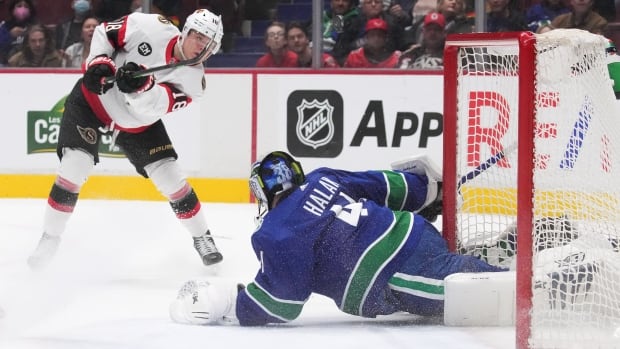 Adam Gaudette scored the game-winning goal in the fifth round and the Ottawa Senators beat the Canucks 4-3 on Tuesday, snapping Vancouver’s six-game winning streak.

The Canucks (38-28-11) took a 2-0 lead in the first period but stumbled in the second and third before losing their first game since April 3.

Alex Formenton scored a pair of goals in regulation time for the Sens (29-41-7), while Parker Kelly scored and Nikita Zaitsev had a pair of assists.

JT Miller and Brock Boeser each had a goal and an assist for Vancouver, and Travis Dermott scored his first goal for the Canucks.

Ottawa’s Filip Gustavsson stopped 34 of 37 shots for his first win since Nov. 13.

Vancouver’s Jaroslav Halak stopped all 14 shots he faced in the first period, but appeared to suffer an injury late in the frame and was replaced by Thatcher Demko to start the second. Demko, who helped the Canucks beat the Dallas Stars 6-2 on Monday, made 15 saves in relief.

Adam Gaudette scored in the fifth round of a penalty shootout to give Ottawa a 4-3 victory over Vancouver. 0:53

The loss hurts Vancouver’s fragile hopes of securing a playoff spot. The Canucks sit four points behind the Stars, who hold the second wild-card spot in the Western Conference.

Drake Batherson also scored for the Sens in the shootout and Miller beat Gustavsson for the Canucks.

Demko denied Formenton a hat-trick midway through the third, sticking out his left leg to make a last-second skid stop on a shot from close range.

Vancouver tied the score 3-3 moments earlier when Boeser sent Dermott a pass from behind the net and the defender fired from the top of the box.

The account marked Dermott’s first point in a Canucks jersey, in his 13th game with the team. The Toronto Maple Leafs dealt the blueliner to Vancouver for a third-round draft pick at the trade deadline in March.

The Senators took the lead at 3:49 of the third when Formenton picked up a loose puck along the boards and scrambled to escape, sending a wrist shot into the top corner to make it 3-2.

Kelly tied it 2:17 into the period with a shot from the hash marks that hit the crossbar and bounced off Demko’s back.

Vancouver outscored the visitors 16-8 in the second period, but it was Ottawa that found the back of the net.

Tim Stutzle shot from inside the blue line and Nikita Zaitsev finished it off from the high slot before Formenton headed it past Demko, cutting Sens’ deficit to a single goal at the 4:04 mark.

Demko took his team to the ice in the second period and took over the Vancouver net.

Halak could be seen shaking his blocker’s hand after a skirmish in front of the crease in the closing minutes of the first frame. The Slovak goalkeeper finished the period but was not on the Canucks’ bench for the rest of the game.

Defenseman Brad Hunt helped push Vancouver’s lead to 2-0 midway through the first. Parked below the goal line, he sent a pass to Boeser, who outplayed Gustavsson with a one-shot for his 21st goal of the year.

Many fans still hadn’t settled into their seats when Vancouver opened the scoring on an early power play after Dylan Gambrell was sent into the box for tripping.

The Canucks were quick to capitalize, with Miller sending a shot past Gustavsson from the top of the showdown circle 1:55 into the game.

The goal, which came on Vancouver’s first shot of the night, was Miller’s 30th of the season.

The Canucks kick off a two-game road trip on Thursday when they take on the Wild in Minnesota. The Senators will face the Blue Jackets in Columbus on Friday.