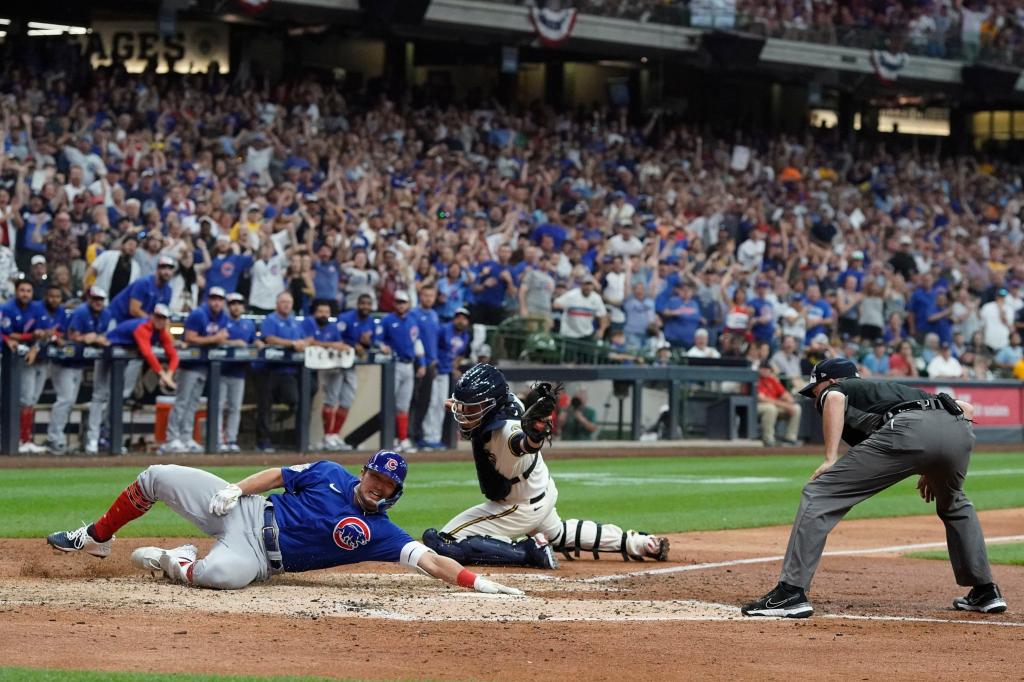 Seiya Suzuki ran around the bases at American Family Field.

He planned to keep running until told otherwise.

When he saw Caratini move slightly down the third-base line to catch the relief throw, Suzuki didn’t want to re-injure himself, particularly in another baserunning situation. His inside-the-park homer in the ninth inning Monday marked a thrilling return to the lineup for Suzuki, who was activated from the disabled list before a 5-2, 10-inning loss to the Brewers.

“Great swing,” manager David Ross said. “He was running out of cash; It’s a lot of credit to the coaches and his group that pushed him to be able to be at the back of a game like that, the first game back and score on an inside parker. It’s pretty impressive.

Suzuki had not played since he sprained his left ring finger on May 26. Then, as he ran through the ninth, he had a thought.

“Stop me,” Suzuki joked through interpreter Toy Matsushita. “My legs were getting pretty tired. I was preparing for someone to say, ‘Stop.’”

The Cubs, however, wasted Suzuki’s hustle. They narrowly missed out on a late win thanks to the go-ahead home run into the park with one out in the ninth.

Leading 2-0 on the count against Brewers’ tough left-hander Josh Hader, Suzuki sliced ​​a 95 mph fastball off the wall in left center field. The ball bounced and rocketed past center fielder Jonathan Davis, allowing Suzuki to run around the bases and put the Cubs up 2-1.

It’s one of the most exciting and rare offensive plays in baseball: Suzuki’s inside-the-park homer marked the Cubs’ first since Javier Baez on Aug. 7, 2017, and only the eighth since 2000. It was also only the second game in 28 appearances this season Hader has allowed a home run. The other two home runs off Hader came in the same game on June 7.

Suzuki, who also singled in the seventh, missed 35 games due to his injury.

“Obviously my injury extended my time away from this team and I was very frustrated,” he said. “So this game meant a lot to me. I just wanted to get in the game, really excited to be back here. The fact that I was able to show what I did today is something that I am very satisfied with.”

Monday’s performance was an encouraging return for Suzuki after the long break. Three rehab games with Triple-A Iowa helped — he went 4-for-9 with a homer, two doubles and three RBIs — but the majors are a different beast, especially for a player who was still adjusting to new pitchers, the league and environment. before suffering the injury.

Suzuki’s return gives the Cubs lineup more depth and another balanced hitter. He showed the good approach of him in the loss. His hard-hitting ball (109.9 mph exit velocity) against a tough pitcher like Hader is worth noting as he continues to adjust.

“I felt some fatigue in the last few innings of this game, but I was able to get through it and I’m glad I was able to show some good results,” Suzuki said.

Cubs reliever David Robertson was unable to close out the bottom of the ninth in one of his worst starts of the season. He struck out three but was hurt on two hits, a pitch hit and a four-pitch walk with the bases loaded to Christian Yelich to bring home the tying run.

“I felt like I was throwing the ball right, and then I missed the strike zone for a second,” Robertson said. “I mean, it happens. He threw a lot of curveballs in a row and then was able to get a fastball in the zone. He just needed to make quality pitches and I couldn’t.

“I needed to give Yelich a tough at-bat and instead I gave him a free pass to first and it cost us a loss.”

Robertson struck out Wily Adames to force extra innings, but the Cubs didn’t take advantage of the baseloading in the 10th. Willson Contreras and Ian Happ struck out to strand runners. Contreras left the game after his at-bat due to a strained left hamstring.

Left-hander Justin Steele put in a standout performance in which he seemed to tire near the end of his career with 108 pitches in 6⅔ innings. He kept the Brewers hitless for four innings. They finally scored a hit on Luis Urías’ well-placed grounder down the first base line to lead off the fifth.

Steele was one strike away from finishing the seventh when the Brewers scored their only run against him on Pedro Severino’s double that tied the game at 1. Two walks by Steele sandwiched the tying hit.