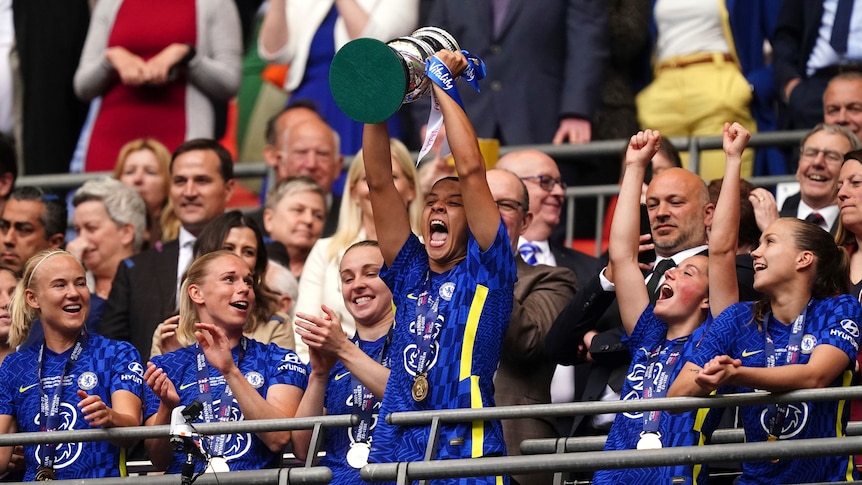 Sam Kerr scored twice at Wembley to win the FA Women’s Cup over Chelsea, repeating her success in the 2021 final when she also scored twice.

The Matildas captain capitalized on an error by Australian teammate Alanna Kennedy for Chelsea’s 3-2 winner over Manchester City on Sunday, sealing victory after another compatriot, Hayley Raso, scored for City. to force the extension.

Kerr opened the scoring after 33 minutes, scoring for the fourth consecutive national final.

City equalized through England’s Lauren Hemp before half-time, but a stunning 62nd-minute goal from Scotland international Erin Cuthbert put Chelsea back in the lead.

With 15 minutes remaining, City brought Raso off the bench and she scored a superb equalizer in the 88th minute.

Nine minutes into overtime, Kennedy tried and failed to cut off a punt that allowed Kerr to run from the halfway line.

His shot, aided by a strong deflection from Alex Greenwood, proved decisive.

He was cruel to Kennedy, who had otherwise been outstanding.

“It’s an amazing feeling to be a part of this club, it’s the best club in the world and I’m so proud. It’s been an amazing journey.”

The first for the WSL Golden Boot winner was a poacher’s goal.

England defender Millie Bright found herself on the right flank and sent a cross astray that goalkeeper Ellie Roebuck seemed to misjudge.

Kerr, however, had read the flight perfectly and came to the far post inches from the goal line to head the ball.

City were dragged back into the game eight minutes later by England’s rising star Hemp.

The winger picked Bright up before cutting inside and firing a shot into the far post.

Cuthbert restored Chelsea’s lead with a shot from 20 meters that went over the crossbar.

Raso’s introduction revived City and equalized when he took a long pass from Greenwood to his chest, held off Chelsea captain Magda Eriksson and converted superbly.

But like so many times, Kerr had the last word.