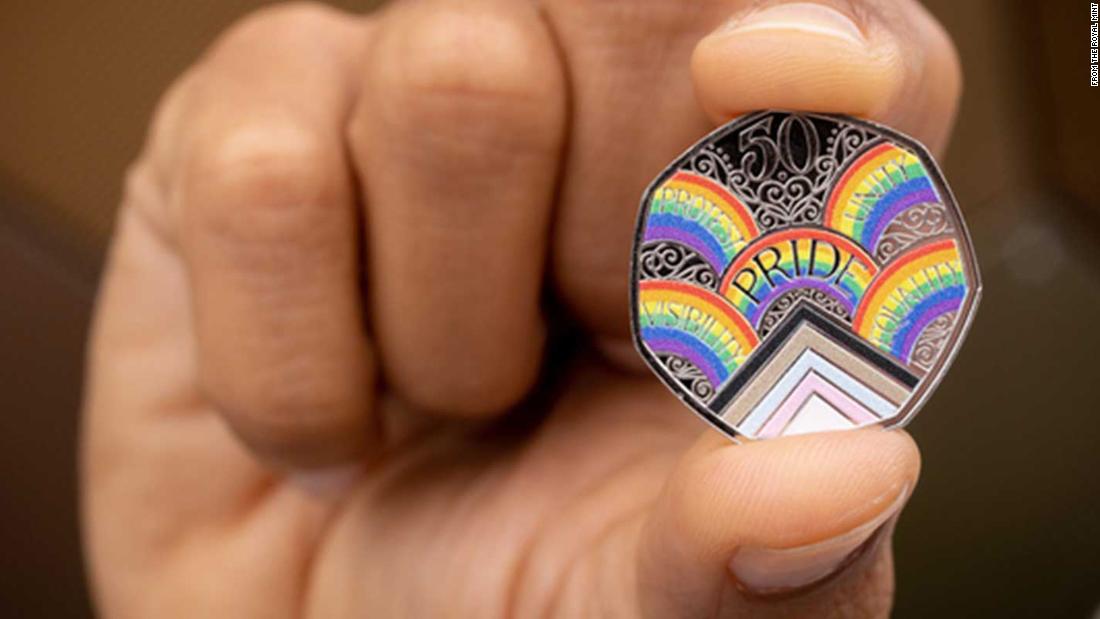 The coin, which will not enter circulation, was designed by London-based artist, writer and LGBTQ+ activist Dominique Holmes.

This is the first time Britain’s LGBTQ+ community has been celebrated with an official UK coin and is part of the Royal Mint’s wider commitment to diversity and inclusion, according to its website.

The usual image of Queen Elizabeth II appears on one side, while the reverse features five small rainbows, the symbol of Pride. The central rainbow bears the word ‘pride’, while the others are adorned with the Pride in London values ​​of protest, visibility, unity and equality. State-of-the-art printing technology was used to create the special edition color effect, the mint said.

The design also features the black, brown, pink, blue and white stripes of the Progress Pride flag, developed in 2018 by non-binary American artist and designer Daniel Quasar.
The statement quoted Asad Shaykh, director of marketing and communications for Pride in London, as saying: “I am humbled that the words I have coined for the brand – PROTEST, VISIBILITY, UNITY AND EQUALITY – will be on real currency, versus the Queen.

“This queer brown migrant has come a long way, fueled by hope, love and this city. This has not been possible anywhere in the world except the UK. Pride in London is very proud today.”

A history of the rainbow flag

Clare Maclennan, director of commemorative coins at the Royal Mint, said in the statement: “Pride UK’s 50th anniversary is a historic celebration and it is a privilege to mark 50 years of progress with this 50p coin. This is the first time Coin of the UK dedicated to Britain’s LGBTQ+ community, with color printing technology that captures the spirit of Pride UK with its iconic rainbow colours.”

The coin will be available to buy on the Royal Mint website this summer.

In 2019, the Royal Canadian Mint similarly issued a $1 coin that combined the words “Equality” and “Egalité” with the work of Vancouver-based artist Joe Average.