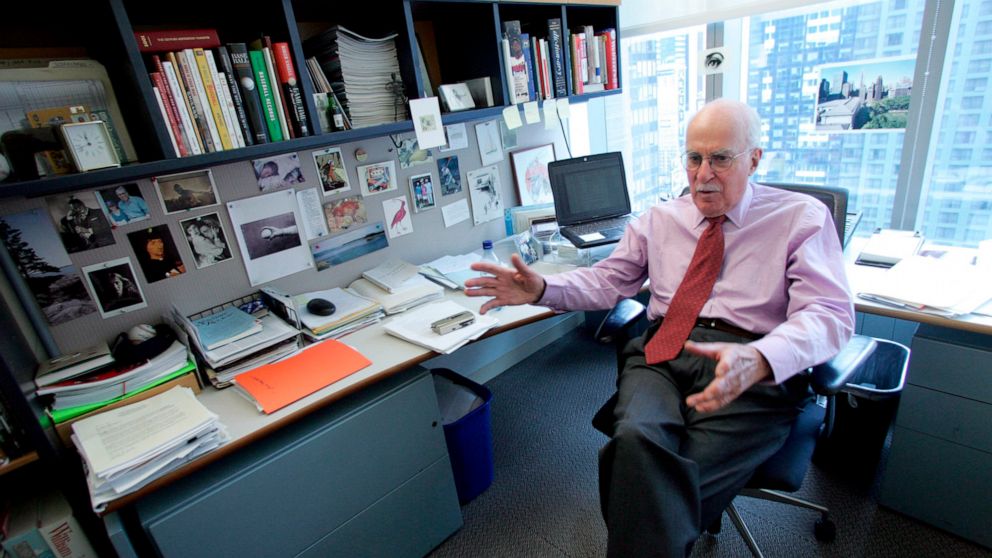 NEW YORK – Roger Angell, the celebrated baseball writer and reigning man of letters who for more than 70 years helped define The New Yorker’s wit and street style through his essays, humor pieces and editing, has died. He was 101.

Angell died Friday of heart failure, according to The New Yorker.

“No one lives forever, but you’d be forgiven if you thought Roger had a good shot,” New Yorker editor David Remnick wrote on Friday. “Like the rest of us, he suffered pain, loss, and self-doubt, but for the most part he kept sadness at bay, always looking forward; he kept writing, reading, memorizing new poems, forming new relationships.”

Heir to and defender of The New Yorker’s early days, Angell was the son of founding fiction editor Katharine White and stepson of writer EB White. He was first published in the magazine when he was 20, during World War II, and still a contributing 90s, an incredibly slender young man who enjoyed tennis and vodka martinis and regarded his life as “protected by the privilege and fascinating work, and shot with good luck.

Angell lived up to the standards of his famous family. He was a recipient of the BBWAA Career Excellence Award, formerly the JG Taylor Spink Award, for meritorious contributions to baseball writing, an honor previously given to Red Smith, Ring Lardner, and Damon Runyon, among others. He was the first recipient of the award who was not a member of the organization that votes for it, the Baseball Writers Association of America.

His editing alone was a lifetime achievement. Beginning in the 1950s, when he inherited his mother’s job (and office), the writers he worked with included John Updike, Ann Beattie, Donald Barthelme, and Bobbie Ann Mason, some of whom suffered numerous rejections before. to enter the special club of New York authors. Angell himself admitted sadly that even her work wasn’t always right.

“Unlike his peers, he is intensely competitive,” Brendan Gill wrote of Angell in “Here at the New Yorker,” a 1975 memoir. “Any challenge, mental or physical, spurs him on.”

Angell’s New Yorker writing was compiled into various baseball books and such publications as “The Stone Arbor and Other Stories” and “A Day in the Life of Roger Angell,” a collection of his humor pieces. He also edited “Nothing But You: Love Stories From The New Yorker” and wrote an annual Christmas poem for the magazine for years. At 93, he completed one of his most praised essays, the deeply personal “This Old Man,” winner of a National Magazine Award.

“I’ve taken a few hits, but I’ve missed worse,” he wrote. “The pains and the insults are bearable. My conversation may be full of gaps and pauses, but I’ve learned to send a private Apache scout ahead to the next sentence, the next, to see if there are any empty nouns or verbs in the landscape up there. If you send a warning, I’ll take a significant pause, of course, until I come up with something else.”

Angell was married three times, most recently to Margaret Moorman. He had three children.

Angell was born in New York in 1920 to Katharine and Ernest Angell, a lawyer who became a director of the American Civil Liberties Union. The New Yorker was founded five years later, with Katharine Angell as fiction editor and a witty young man named Andy White (as his friends called EB White) contributing humor pieces.

His parents were gifted and strong, apparently too strong. “What a marriage that must have been,” wrote Roger Angell in “Let Me Finish,” a book of essays published in 2006, “replete with sex, brilliance, and psychic murder, and imparting lasting unease.” By 1929, her mother had married the kinder White, and Angell would recall weekend visits to her mother and her new husband’s apartment, a place “full of laughing young writers and artists chain-smoking The New Yorkers”.

In high school, he was so engrossed in literature and literary life that for Christmas one year he asked for a book of AE Housman poems, a top hat, and a bottle of sherry. Stationed in Hawaii during World War II, Angell edited an Air Force magazine and in 1944 he had his first byline in The New Yorker. He was identified as Cpl. Roger Angell, author of the short story “Three Ladies in the Morning,” and his first words to appear in the magazine were “The downtown hotel restaurant was almost empty at 11:30 in the morning.”

There were no signs, at least open, of family rivalry. White encouraged her stepson to write for the magazine and even recommended him to The New Yorker founder Harold Ross, explaining that Angell “lacks the practical experience but has the goods.” Angell, meanwhile, lovingly wrote about her stepfather. In a 2005 New Yorker essay, she noted that they were close for nearly 60 years and recalled that “the sense of home and informal attachment” she got from White’s writing was “even more powerful than it was for her other readers.”

Not everyone was thrilled with Angell or the White-Angell family connection at The New Yorker. Former editor Renata Adler alleged that Angell “established an open and superficially jocular state of war with the rest of the magazine.” Complaints about nepotism were not uncommon, and Tom Wolfe mocked his “cache” in a magazine where his mother and stepfather were founding members. “Everything falls into place, locked in place,” Wolfe wrote.

Unlike White, known for the children’s classics “Charlotte’s Web” and “Stuart Little,” Angell never wrote a major novel. But he enjoyed a loyal following through his humorous writing and baseball essays, which placed him in the pantheon of professional sportswriters as well as Updike, James Thurber and other moonlighting literary writers. Like Updike, he didn’t alter his prose style for baseball, but he showed how well the game suited the life of the mind.

“Baseball is not life itself, though the resemblance keeps emerging,” Angell wrote in “The Life,” a 1987 essay. “It’s probably a good idea to keep the two apart, but old fans, if you’re like me , they can’t help but notice how cleverly our game replicates a larger calendar, with its beguiling optimism of April; the merry revelry of June; the exhausting, serious and endless (surely) business of midsummer; September’s reckoning… and then the abrupt end of autumn, when we wish, almost demand, a final prolonged and brilliant adventure just before the curtain “.

Angell began covering baseball in the early 1960s, when The New Yorker was looking to expand its readership. Over the next few decades, he wrote definitive profiles of players ranging from Hall of Famer Bob Gibson to fallen Pittsburgh Pirates star Steve Blass and weighed in on everything from manager Casey Stengel’s verbiage (“a walking pantheon of evocations”) to the marvels of Derek Jeter (“imperturbably brilliant”). He was born the year before the New York Yankees won their first World Series and his baseball memories range from the prime of Babe Ruth’s life to 21st-century stars like Jeter, Mike Trout and Albert Pujols.

Even as drug and labor battles shared and even stole the headlines, he thought the real story remained on the playing field. Angell never had official credentials as a sportswriter: he was just a fan, an appreciative spectator, a former high school pitcher who once aspired to the big leagues.

“Sometime in my 30s or 40s, I was seeing a psychiatrist and I came in with a dream,” Angell told The Associated Press in a 1988 interview. “I had a dream that there were some bushes and bushes, and there was a tombstone with my name and my birthday and the year I was in.

“Then I realized it meant the end of my baseball dreams.”