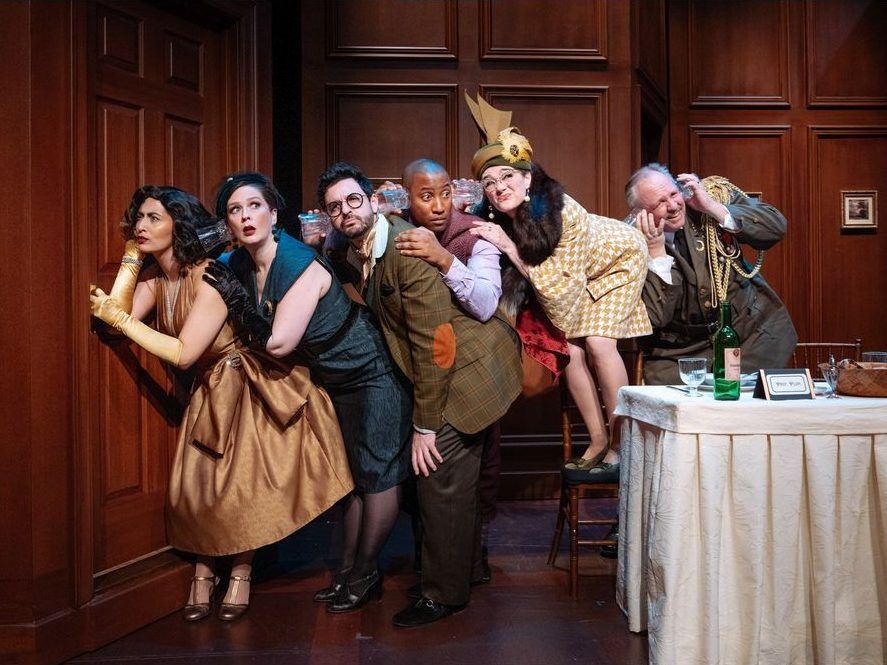 With the Vertigo Theater production of the crime novel Clue, seeing is believing.

Words are woefully inadequate to describe the inspired madness that characterizes everything from directing and performances to set designs, props, costumes, sound and lighting. It’s comic nonsense at its finest.

Clue is the theatrical version of the 1985 film inspired by the Hasbro board game and several Agatha Christie thrillers. Six mysterious guests have been summoned to the remote mansion of Mr. Boddy, who they quickly learn has been blackmailing them for years. To keep their identities secret, they have been given new names and each has been given a weapon. When Mr. Boddy and his cook end up dead, they are all suspects and even potential victims of the crazed and desperate killer.

Fortunately, or perhaps unfortunately for them, Boddy’s butler Wadsworth takes charge of the night’s events and their lives. Christopher Hunt plays Wadsworth as the stereotypical pompous English butler even though the play is set on the outskirts of Washington, DC, but there are signs early on that there is more to Wadsworth than meets the eye, as there are many nuances in Hunt’s performance.

Director Haysam Kadri has allowed or even encouraged his 10 cast members to be extravagant in game form, resulting in a delirious mix of physical and verbal gymnastics. They say and do the most ridiculous things.

Grant Linneberg is a commanding presence as Colonel Mustard, so the fact that the man is a clumsy buffoon is all the more fun as is Elinor Holt’s Mrs. Peacock, the church lady with a hip flask and dagger. in her bag.

As disgraced doctor Professor Plum, Tyrell Crews has invented a ridiculous method of determining if someone is really dead, and Vanessa Leticia Jette’s Miss Scarlet is a cunning seductress whose body may be deadlier than the candlestick she wields.

Tenaj Williams’s Mr. Green is like a frightened mouse, squirming and cowering at every loud noise, while Katherine Fadum’s Mrs. White, dressed all in black, is a rather moody and morbid soul who cries over the death of her five husbands.

Jamie Konchak and Kaleb Tekeste, who play four of the corpses, are thrown around the stage and manhandled like rag dolls, and Natasha Strickey’s French maid has a heavy accent and bows, an ideal companion for Hunt’s butler.

There are nine rooms in the Clue board game and before the night is over, the onstage action will visit them all thanks to Scott Reid’s amazingly clever set that the actors maneuver to the constant delight and applause of the audience.

Kadri’s clue may be a happy slapstick, but it’s not a botch job. Everything is precise and calculated, which means it’s intelligently controlled chaos.

Deitra Kalyn’s costumes are hilarious exaggerations of 1950s fashion and Anton de Groot’s lighting and Andrew Blizzard’s sound design remind us that it’s a dark and stormy night in a creepy old mansion.

Vertigo’s Clue is world-class entertainment with the kind of slick professionalism that has become Vertigo’s legacy and must be preserved and fostered by the yet-to-be-announced new art director.

Clue occurs in the main theater Vertigo at the base of Calgary Tower until June 5.