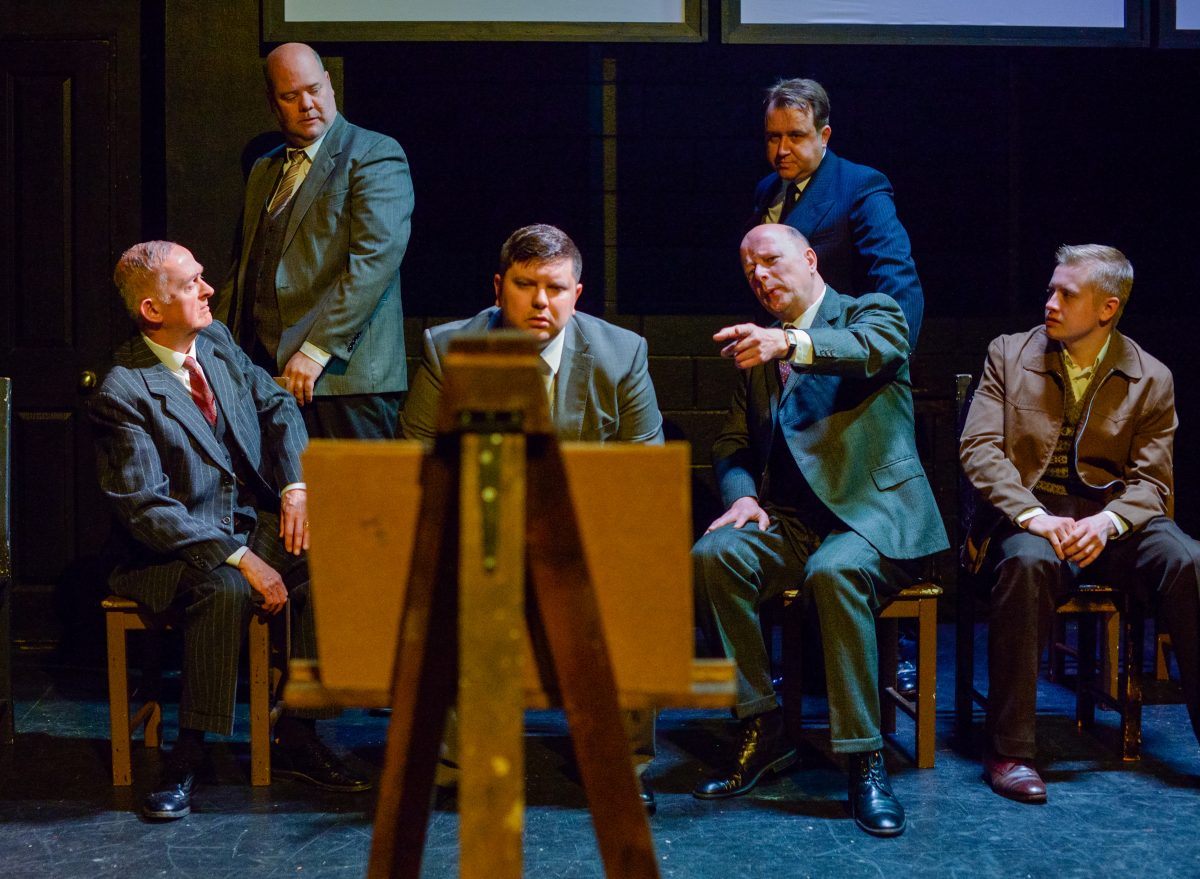 THE RON Barber Studio at The Crescent has seen some outstanding productions gracing its resident company flexible performance space this season, to which Alan K Marshall’s ‘Pitmen Painters’ is a worthy and welcome addition.

Written by ‘Billy Elliot’ playwright Lee Hall, Marshall succinctly describes it in his show notes as ‘a play about the past that asks vital questions about the state of the art and the community today’.

The ‘pitmen’ in the title were poorly educated working-class men from Ashington in Northumberland who in 1934 organized a workers’ art appreciation class.

They hire tutor Robert Lyon to talk to them about art a bit like they would a club entertainer, but when this fails, Lyon cleverly ditches the lectures and turns the sessions into hands-on art classes.

It turned out that hands that were adept at chipping rocks from cold coal layers deep underground are also adept at applying a brush to canvas. Their work captured their hard lives and the austerity and conformity of the community in which they lived.

Social and political commentary was not only expressed as they painted, but fiercely debated and incorporated into almost every brushstroke.

The remarkable images they produced received critical acclaim and after a while became prized by collectors. However, fame did not cross the pitmen’s minds as their education and talent blossomed.

One could say that stubbornly, the pitmen remained loyal and true to their community and each other.

Robert Laird offers a notable outing as Lyon the tutor. His journey with the pitmen enriches his own life even more than his influence deepens theirs. His squirming at his own fault when he is awarded a professorship at the Edinburgh School of Art on the back of his Pitmen Painter dissertation was a moment of brilliance.

Brian Wilson, as the group’s organizer, George Brown, delivers his lines with a rat-a-tat-tat rhythm that is hypnotic, profound at times, and comical at others.

Mike Baughan made a lovable Marxist troublemaker as Harry Wilson and Damien Dickens provided the visual laughs as burly Jimmy Floyd with a walking buffet hidden in his clothes.

Luke Plimmer brooded and bubbled as the frustrated ‘Young Lad’ who struggles to fit in but always ends up as ‘Billy don’t kill.’

Art-loving patron and wealthy socialite Helen Sutherland was a light-hearted excursion from the talented Karen Leadbetter and Susan Parks made for a deliciously sassy nude model as Jessica Shannon.

A cameo appearance by Luke Plimmer as Mrs. Sutherland’s artist-in-residence, artist Ben Nicholson, was a welcome vignette among politics. Oh how I loved the smell of that cigarette smoke, even if it was herbal, it took me back to the old days when it was almost mandatory to have an overflowing ashtray in the rehearsal room.

Graeme Braidwood’s interpretation of Oliver Kilbourn, the most talented of all painters, was simply a tour-de-force.

There were moments when you could almost hear Kilbourn’s brain as he weighed things in his mind.

Braidwood was as steady as a drum in his portrayal of half would-be victim, half misfit. To his Kilbourn, the glass will always be half empty. Even when Mrs. Sutherland offers him a life-changing stipend and possibly a romp in her four-poster bed, he refuses, preferring to find his solace in socialism than soft sheets and self-indulgence.

In his role as director, Marshall has painted his own canvas in broad strokes through a simple arrangement of wooden chairs. These are unceremoniously struck to indicate where we are on the journey.

This is contrasted with the delicacy of a single-strand touch in intimate moments, where often all that is needed is a silent meeting of gazes.

Marshall’s sense of pace and rhythm ensure that the actors and not the preachers deliver the text. There’s no excess balls, and rightly so we get momentary throbs, rather than pregnant pauses.

The use of projection screens works perfectly: it enhances, it doesn’t intrude, and it ultimately conveys the news that the Ashington well was closed in 1981, bringing devastation to the community.

The final scene with our Pitmen singing ‘Gresford’, the miners’ anthem, with a blaring brass band behind them. he made the hairs on the back of her neck stand up.

This powerful piece is theater at its finest, a triumph not to be missed.

Pitmen Painters performs at The Crescent through Saturday, May 21. Click here for schedules, tickets and more information.