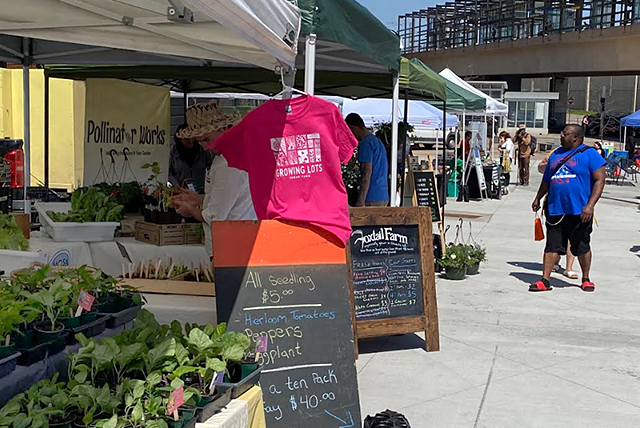 Sometime in the late morning, a DJ pressed “play” on the corner of 23rd Avenue South and East 31st Street and Hues Corporation’s jam, “Rock the Boat,” rolled out into the sunlight. in the shadow of the new B-side apartment building in the Corcoran neighborhood, the row of booths marked the first time the Downtown Farmers Market it moved back to its previous location in what for years had been an empty parking lot.

it didn’t take long for Green Garden Bakery, the only seller run entirely by young entrepreneurs, to start selling. The table was just one of many that lined the edge of a new plaza wedged between apartments and the Midtown Light Rail stop on the blue line light rail in south Minneapolis.

“We are a youth-run business,” a teenager named Isahk Abubaker told me enthusiastically. “We started in 2015 when a friend of ours was hit by a car and his medical bills totaled $5,000. So we sold baked goods and were able to pay the bills. We looked at how we could help people with our baked goods and decided, ‘Why don’t we help more people in our neighborhood?’”

The bakery is located outside of the Near North community and is just one of several stalls on display at the Midtown Farmers Market. The two dozen stalls reflect an eclectic mix of everything from hand-embroidered denim jackets to artisan jams, starter plants and local butcher shops. One of the oldest markets in the city, dating back to 2003, which means this will be its 20th season connecting locals with local food. It has an inclusive spirit that makes it unique and was the first farmers market in Minneapolis to begin accepting EBT funds way back in 2006.

“It’s a celebratory atmosphere,” said one of the market’s organizers, Ocean Jurney, describing the inaugural event.

The market has run out Corcoran Neighborhood Organization office, one of the most active of the city’s 70 community groups. The food at the market is all from Wisconsin and Minnesota, and the Corcoran team curates a variety of vendors to offer a wide range of products for people from the South.

‘A lot of things happen’

There is also a sense of healing in the air. After a volatile few years away from its original home, the market’s return to the light rail stop marks a return, if not normalcy, to something that puts public space at the center of everyday life.

“We are moving back to the original location; it’s had quite a bit of renovation,” said Keeya Allen, outgoing Market Director, referring to the new sidewalks, grass and benches. “They’ve renovated that whole lot right there, between the new apartment building and the light rail.”

To say that the neighborhood has been through a lot would be an understatement. The market is located across Highway 55 (Hiawatha Avenue) from the former Minneapolis Police Precinct 3, which burned down during protests following the killing of George Floyd. Vacant lots are still a few blocks away on Lake Street, most notably at the corner of East Lake and 27th Avenue South, where the massive, century-old Odd Fellows building once stood. If you know where to look, the scars from the 2020 fires are barely visible on all the surrounding blocks.

But today, everyone seems happy to be back on Lake Street in the new and improved location. “We are definitely excited to be back home for our 20th season,” said Mo Hanson, the market’s community program director. “We love the hustle and bustle of the Hi-Lake area. A lot of things are happening.”

For the past three years, the market was displaced from its surface parking lot during the construction of a new apartment complex. Along with side B, the Apartments in Southside each has about 150 new homes that sit right next to the light rail station. During construction, the market was temporarily relocated to the lot next to the Moon Palace Bookstore across the road. (For the record, Mo Hanson asked me to greet the people of Moon Palace.)

The temporary site was a poetic coincidence, because, as Hanson explained, Moon Palace started out as a vendor at the Midtown Farmer’s Market before opening its physical location. That’s just one of the small businesses that have relied on the market to get the word out over the years.

“We’re excited about the new plaza and bringing a community gathering there,” Hanson said, gesturing to local vendors. “In fact, I will know where my food will come from for the next six months.”

“There’s something for everyone at the Midtown Famers Market,” said Jurney as he chatted with the organizing team. “We are an inclusive space, driven by family and community, and once you come and visit us, it will definitely become one of your favorite markets.”

But here’s a pro tip: If you want bread or rolls from Green Garden Bakery, you better get there early. “We are already exhausted,” Isahk Abubakar told me, apologetically. However, he and his partner, Ariana Merrick, were still dating, hoping to sell a T-shirt or two and soak up the sunny spring atmosphere.

The Midtown Farmers Market is open May through October, Saturdays from 8:00 a.m. to 1:00 p.m. and Tuesdays from 3 to 7 p.m. at its former location on the west side of the Lake Street-Midtown Blue Line stop.