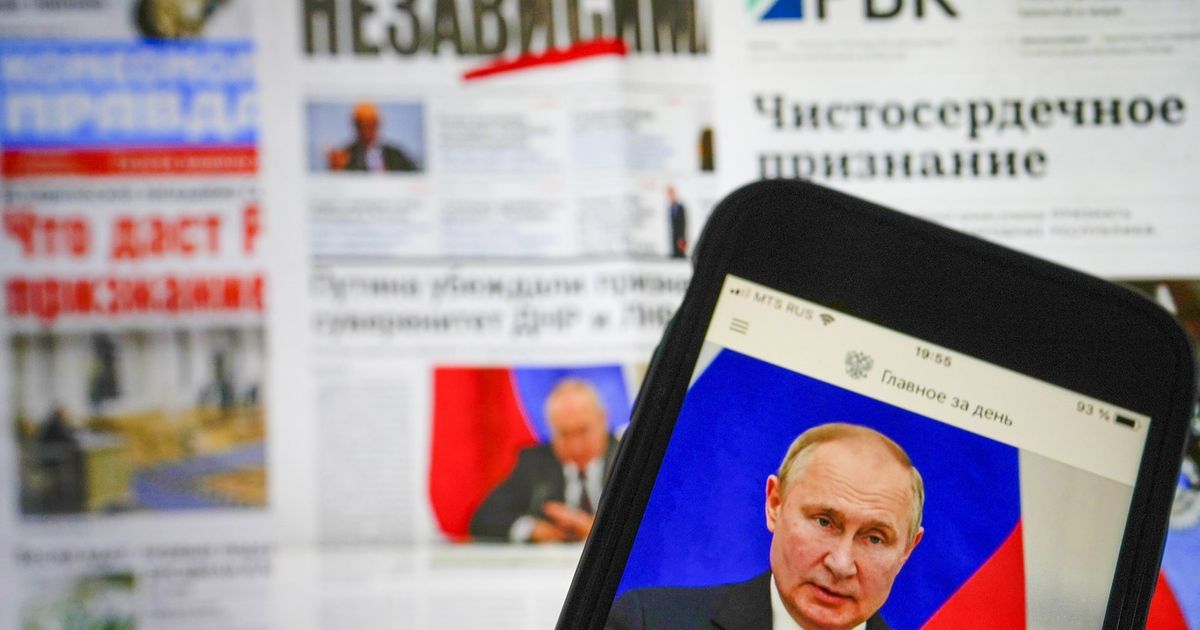 The series of US and Western sanctions against Russia has finally targeted Vladimir Putin’s state media networks that continue to spread lies and disinformation about the cruelty he has perpetuated in Ukraine. The three main television stations to be sanctioned (NTV, Channel one Russia, Television Russia) received more than $300 million in advertising revenue from Western countries last year.

Obviously, Russia’s TV stations and media have more to do with propaganda than with reporting the truth and facts. This is how Putin wants to be portrayed, as a champion of noble causes (denazification). He seems to be working as his numbers in the polls continue to be at a high level.

The remaining vestiges of Russia’s independent press were stifled this year as Putin cracked down on reporting on the war. Russia criminalized “unofficial” and critical reporting, even describing it as a war or an invasion.

“At home, the Kremlin is engaged in an all-out assault on media freedom and truth, and Moscow’s efforts to mislead and suppress the truth of the brutal invasion are intensifying,” the US State Department said. in a March 2 press release.

In the mid-1990s, Putin’s first military intervention was in neighboring Chechnya. At the same time, Russia’s newly founded private and independent television station, NTV, had journalists investigating the possible staging by the Russian secret service (FSB) of explosions in Moscow to justify the Kremlin’s actions. Such a critical report infuriated Putin, who promptly ordered his own investigation that ultimately brought NTV and the other media outlets under state control.

Vladimir Gusinski, a young and ambitious Jewish businessman, was the first Russian oligarch who dared to criticize the new Kremlin head of state. He was known as the media tycoon, who acquired the NTV television station, the Itogi news magazine (a partner with Newsweek), the Echo Moscow radio station, and the Sevodnya newspaper. In David Remnick’s February 22, 1995 New Yorker article, “The Tycoon and the Kremlin,” he described Gusinsky as “Russia’s greatest media tycoon and, as a result, deeply involved in the Kremlin policy.

At the time, I assisted Gusinsky, overseeing his schedule and accompanying him on meetings that included The Washington Post and Newsweek. His early media acquisition had unintended consequences. As was the case with his oligarch friends, the idea was to further his own commercial and political interests. But for Gusinsky, his meetings in Washington, DC and New York were a moment of awakening, realizing that he was poised to become a true champion of free and independent information in the post-communist era.

That ambition would not sit well with Putin. Beyond NTV’s critical reporting on the Kremlin, what really bothered Putin was the popular weekly satire TV show known as “Kukly.” It featured a cast of hideous-looking latex dolls to taunt politicians. One portrayed Putin as an ugly, screaming baby, even with a hint of being a prostitute on the streets of Moscow. Putin wanted none of that, marking the beginning of the end for a free and independent press in Russia. In June 2000, the Russian Prosecutor General arrested Gusinsky on false charges and incarcerated him in the infamous Butyrka prison. Several weeks later, Gusinsky was given a choice: hand over his Media Most assets to Gazprom, Russia’s largest energy company, and leave the country, or face an indefinite prison term.

Faced with mounting financial pressures, Gusinsky desperately sought outside investors, including CNN’s Ted Turner, to prevent an attempt by Gazprom to take over his media operations. But the high stakes and limited time left Gusinsky with no choice but to sign a deal to transfer all of his media assets to a state-owned energy company, a division called Gazprom Media. The criminal investigation was closed and Gusinsky quickly left Moscow. On his last trip to Moscow airport, he was accompanied by Boris Nemtsov, an opposition leader who was assassinated in February 2015.

The breaking news of Gusinsky’s arrest and the seizure of his media assets by the Russian government received front-page coverage among major US news publications, including The New York Times, Washington Post, and The Wall Street Journal. , with headlines like “Russian media tycoon struggles to keep his Empire under siege.”

If Gusinsky’s media conglomerate existed today (reporting the truth, criticizing Putin’s policies), Putin’s poll numbers would likely be reversed and he would be kicked out of the Kremlin.

Unlike Ukraine, many of the former Soviet republics today retain various forms of populist nationalism. Its authoritarian leaders see Putin as a role model, applying his KGB tactics to eliminate or suppress both political opposition and direct news reporting. Whether their media is state-owned or private companies beholden to those who hold the reins of power, autocratic rulers in countries like Belarus, Hungary and Georgia are emboldened by Putin’s example. I suspect his advice to them would absolutely be to “control the media”.

While press freedom can be tricky at times, there is no doubt that it is fundamental to any democracy.

mad don
served in the US House of Representatives from 1974 to 1988 in the 3rd Legislative District and is the author of “A Higher Calling: Faith and Politics in the Public Square.”