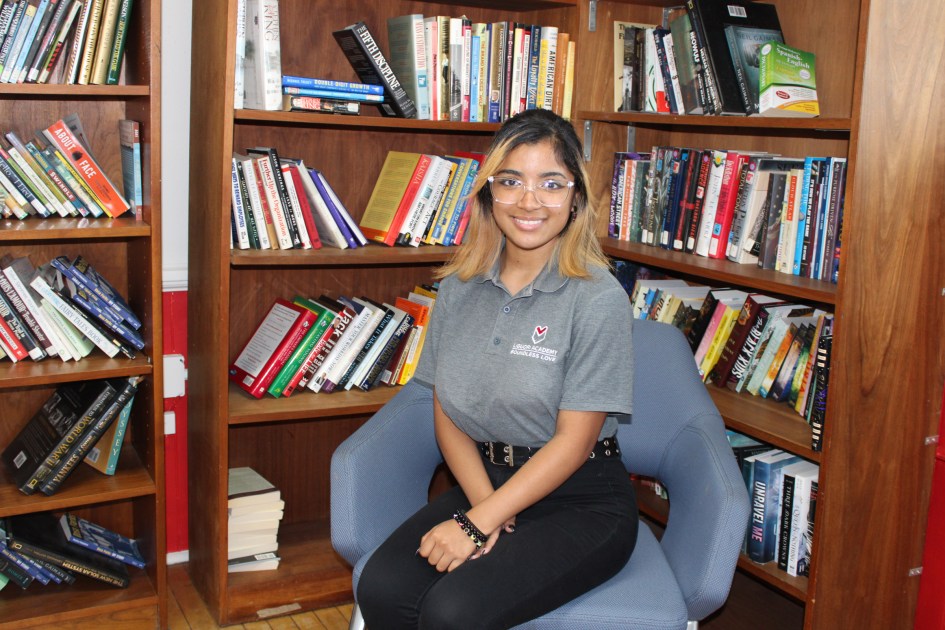 A Port Richmond high school finally has a library, thanks to the work of a dedicated administrator and donations from local authors, a local business and community members.

Liguori Academy held a ribbon cutting Wednesday for its “Library of Unlimited Knowledge,” celebrating the transformation of a previously unused second-floor room into a warm space with bookshelves along each wall and nooks for students sit and read.

Since it opened in the fall, the library has been used in a variety of ways. It has been an alternative site for English and creative writing classes, and served as a subject for photography students in an after-school internship program.

His photos were displayed at the ribbon cutting. One was from Liguori senior Ahmya Fitten, who said that she had never done photography before and that she was delighted with the opportunity. “It’s just a different way of looking at the world,” she said.

The library has also become a place where students come on their own.

“My office is right next door, and I’ll be gone for the day, and there will be kids here, sitting on a couch looking at a book,” said Nick Gregorio, Liguori’s dean of students. “I have to shoo them away at that point because it’s closing time, but yeah, that says it all.”

The private, not-for-profit school opened in Kensington in 2016, then moved to its current location last year. It enrolls about 90 students from across the city, according to Gregorio, most of whom are students of color. It serves about 125 more through the Fortis Program, a district-funded initiative that helps low-credit Philadelphia high school students finish their education through personalized instruction.

In Philadelphia, access to a library is far from a given.

The free library system reduced its hours during the pandemic and has struggled to maintain even those reduced hours due to a lack of staff.

That was evident on the day of Liguori’s ribbon cutting. The school is less than a mile from four different branches: the Fishtown Community Library, the Richmond Library, the Kensington Library, and the McPherson Square Library. On Wednesday, the Fishtown and Richmond branches were closed due to lack of staff.

Staffing is also an issue for Philadelphia public schools, which sometimes have libraries but can’t make good use of them because the district reportedly only has a single-digit number of librarians.

The Liguori Academy library also does not have a librarian, Gregorio said. And the school is still thinking about a cataloging system.

“Basically, at this point, the kids are like, ‘Can I have this?’ And I say yes, hoping they will bring it back,” he said.

No library? “You could have heard the tires screeching”

Gregorio, the dean of students, is a published author. He credited his own school library with making him a “lifetime reader,” saying he first floated the idea of ​​opening one in Liguori when he started there six years ago.

His plan didn’t go into effect until November 2020. As the school moved into its new building, one of his philanthropic partners, Cherry Hill’s marketing agency CMI Media Group and Compas, wanted to donate books to the school’s library. school. Then they discovered that there were none.

“You could have heard the tires screeching,” Carly Kuper, senior vice president of communications for CMI and Compas, told Billy Penn. “Like, ‘Wait a second.’ I think a lot of people don’t even realize that that’s possible, that there could be a school without a library, but it’s actually incredibly common.”

To help remedy the problem, CMI and Compas dedicated the next two employee vacation drives to raising money to purchase books and furniture for the space.

With that base funding to start with, Liguori’s staff put the plan into action. The educators came up with a list of titles to get started, and Gregorio visited A Novel Idea Bookstore in East Passyunk to collect them and ask for more recommendations. He also posted on social media asking small press and freelance writers if they wanted to donate copies of his work.

“Hundreds of books, dozens of boxes started showing up at my house,” Gregorio said. “My wife was not excited. It was kind of a running joke: ‘Oh, you’ve got four more boxes at the door.’”

A Novel Idea co-owner, Christina Rosso-Schneider, also an author, said it feels “surreal” to have two of her books on the shelves of the school library, a personal novelty.

In addition to the small press section, Liguori’s library offerings include plenty of horror and science fiction as of now, Gregorio said. He would like to add more literary fiction and young adult novels to the collection, which he said he hasn’t counted, noting that it has grown a lot in recent months.

There is not yet a specific time built into students’ daily schedules to visit the library, according to Gregorio, but he hopes to do so next year.

Abigail Appleton, who teaches job and career development skills, said she was excited to see students walk into the library without being asked.

“In my high school, the library was really a place where people were every day,” said Mary Theresa Martin, who also teaches workforce at Liguori. She described it as a safe place where students could get away from their desk and explore the things that interested them. “And for our students, now they will have the same opportunity.”