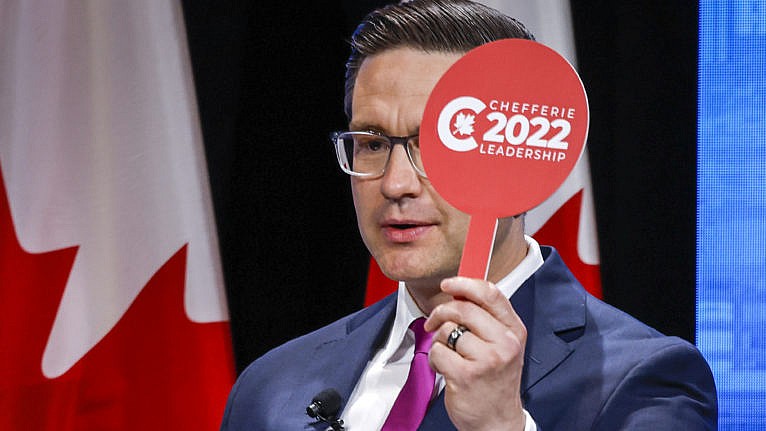 Political Insider for May 13: Experts Weigh in on CCP Leadership Debate; how to combat conspiracy theories; Ontario Liberals lose another candidate

Welcome to a preview of Maclean’s Politics Insider newsletter. Sign up to have it delivered directly to your inbox in the morning.

a number of people Think of Pierre Poilievre shouldn’t have promised to fire the governor of the Bank of Canada tiff macklem during Wednesday’s CCP leadership debate, beginning, unsurprisingly, with justin Trudeau, as CTV reports: “The fact that one of the main candidates of the Conservative Party of Canada … seems to profoundly misunderstand that, or not care about the facts at all, is somewhat disappointing in an era where we need more responsible leadership, not less.”

think hard: In it Mail, kelly mcparlandwho is not an apologist for Trudeau, has a strongly worded column warning conservatives against Poilievre on the basis, in part, of the Macklem gambit.

It is a reckless, reckless and dangerous promise. Implementing it would be totally irresponsible. The bank’s independence is vital if Canadians are to retain any confidence in its trustworthiness as an institution. The erosion of public confidence in national institutions is one of the main causes—perhaps the main cause—of the loss of faith in governments themselves. We are seeing the result of that erosion all around us, in the division, the partisanship, the corrosive anger that permeates so many corners of life today.

Reckless? In it Balloon, Konrad Yakabuski has a column calling Poilievre’s promise unwise.

Poilievre’s criticism of Macklem suggests that he would replace him with a governor who would raise interest rates even faster and higher than the central bank is currently doing. That would hurt the “working people” he says he fights for much more than the drop in purchasing power they have experienced this year as a result of inflationary pressures. It would also create a whole new set of problems (see: recession) that could potentially cause enormous economic damage to the average Canadian. This is precisely why most elected politicians know better than to undermine the independence of the Bank of Canada.

Do you remember Raven? On your site, paul wells he lashes out at the debate in which Poilievre made his promise to fire Macklem, and considers the historical precedent for turning the central bank governor into a political football.

In 1990, a governor of the Bank of Canada, Juan Raven, set high interest rates to fight inflation, more or less the opposite of the Bank’s recent approach, albeit under very different circumstances. What did the liberals do in response? Well, what any responsible opposition party does, of course. They ran against the governor of the Bank of Canada. In this old magazine cover story, a banking economist said that the Raven was running “stupid policy.”

Paddling: like wells, Don Martinwriting for CTV, he didn’t think much of the format of the debate.

Far from giving candidates the freedom to compare and contrast their positions, they were shoehorned into sound bites with strictly enforced time limits. You just can’t beat a clock that splits a minute into multiple responses from competing candidates and expect a response from anyone to influence votes. It was, for those forced to watch out of party loyalty, morbid political curiosity or a journalistic paycheck, a staggering disappointment guaranteed to keep voters disenchanted with Trudeau’s liberals from rushing into the royal blue conservative tent.

The correct discussion: Writing for CBC, Aaron Wherry points out that the debate got to the heart of an issue.

That’s what links the convoy, cryptocurrencies, and the Bank of Canada governor, as well as Poilievre’s embrace of suspicions about the World Economic Forum (which actually predates Poilievre’s run for leadership). Poilievre might say that the current state of affairs in Canada justifies such things. Charest could say that choosing to follow that path only leads to bad places.

Other candidates: In it Mail, Sabrina Maddeaux he writes that the debate gave two dark horses a chance to show their stuff.

As the favourite, this was the debate Poilievre was meant to lose, which he certainly didn’t. However, he wouldn’t say that he won either. The strict format undermined his trademark attack dog style, which, for better or worse, prevented any standout moments. The real fight was for the position of Poilievre’s main adversary. Until now, many assumed that he was Charest. However, after tonight, I’m not sure that’s still true. Charest seems out of touch with the Conservative party today and unable to find a tone and message that clicks. He is calm when he should be angry and angry when he makes more sense to use a neutral tone. Rather, he was (Patrick) Brown Y Scott Aitchison who presented the most convincing alternatives to Poilievre.

Dangerous: Jagmeet Singh, at a pro-choice rally in Ottawa on Thursday, again commented on an ugly scene in Peterborough, Ontario. this week, where he was attacked by anti-vaccine fanatics, CTV reports: “I think about the message that is being sent to a lot of people who might consider politics and now don’t, seeing that level of tension and aggression. And that is going to be a lot of people who want to participate in politics, who are going to be discouraged and I think that is very dangerous.”

Wider whip: In it Star, Rachel Patel has a thoughtful article on what can be done about the rising tide of conspiracy theories.

The incidents are just a few examples of a broader scourge of misleading content plaguing Canada, the consequences of which will be far-reaching, it says. marcus kolga, a disinformation expert at the Macdonald-Laurier Institute. Kolga has watched as anti-vaccination narratives and conspiracies in Canada have been amplified by Russian state media, coalescing into convoy movements across the country. She in turn, has seen Canadian anti-blockade groups exploit and spread Russian disinformation about Ukraine.

Counter the threat: And on CBC, Elizabeth Thompson has an article about police and security officials who testified on Parliament Hill on Thursday that the threat of violent extremism has increased in Canada during the pandemic, and that the government must work to counter the threat as well.

Most unpleasant business: writing on the Walrusyour correspondent has a long article discussing how the growing number of conspirators is making the business of politics more dangerous and unpleasant.

Other: The Ontario Liberals apparently lost another candidate on Thursday, the Star reports, raising questions about their investigation.

well poisoned: In it Calgary Herald, gift braid has a column on the mistrust surrounding the UCP leadership vote that Jason Kenney must win if he is to keep his job.

history lesson: In TVO, Jamie Bradburn has an interesting history lesson on the surprisingly ideological (to your correspondent) 1945 election campaign in Ontario.

Overcome maclean‘s sent directly to your inbox. Sign up to receive news, comments and analysis.