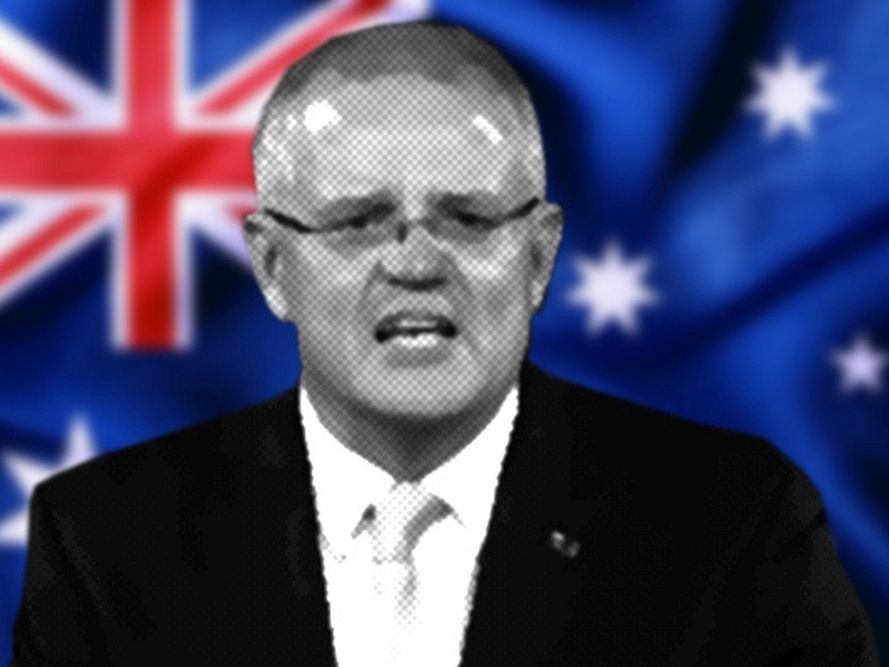 If Scott Morrison and the Coalition win the government, the state of our democracy will be in jeopardy, writes Peter Henning.

We ALL know who Humpty Dumpty is, right? He is a nursery rhyme character who looks like an egg and cannot be put back together when broken.

There has always been a twist to the lullaby. It has its origins in English history and represents a major change in the political landscape that implies failure at the highest level.

Humpty has evolved over time in the English imagination, but like the ancient Greek notion of hubris resulting in nemesis, it achieved its most notable identity in the 1870s, courtesy of a conversation, or interview, with Alice, recorded and published, word-perfect, by Lewis Carroll in through the looking glass.

The key to Humpty’s view of his power is this brief exchange with Alice:

“When I use a word,” Humpty Dumpty said in a rather dismissive tone, “it means exactly what I choose it to mean, no more and no less.”

“The question is,” Alice said, “if you can make the words mean different things, that’s all.”

“The question is,” said Humpty Dumpty, “which will be master, that is all.”

The point is that Humpty Dumpty-style politicians perceive themselves as extraordinary, which basically means that the usual rules, conventions, checks and balances associated with the political system are obstacles that they can remove or use for their own ends.

Humpty’s self-centered narcissism in the 21st century has been epitomized by former US President Donald Trump, a man so in need of continual affirmation (to preserve his sense of self and not fall apart), that it’s impossible for him. admit the reality of defeating him in 2020.

Humpty Trump has been the primary election model followed by Prime Minister Scott Morrison during the increasingly destructive and divisive years of his “leadership” since 2018. Trump and Morrison were political soul mates, and Morrison loved Trump’s script and the way it was delivered.

Probably Trump’s most important influence on Morrison was Trump’s consistently successful abuse of his “national emergency” powers as President of the US to use public funds as he wanted, circumventing congressional scrutiny and opposition, and allowing you to reallocate funds for purposes other than those legislated by Congress.

Since 2019, the Morrison administration has followed the Trump model by devising ways and means to avoid parliamentary control over large amounts of public funds.

This issue, in terms of its very real potential to destroy the remaining fragile foundations of Australian democracy, has been examined in depth and precision by former Justice Stephen Charles and Catherine Williams, director of research at the Center for Public Integrity, in their book recently posted, keeping them honest.

They present a litany of issues from recent years ‘that would have warranted examination by a national integrity commission’ while describing the attitude of the Morrison government towards a proper commission as ‘useless and contemptible’.

The issues range from ‘systemic fraud accusations in the Department of Defense’the submarine fiasco, sports thefts and car parks, the Western Sydney Airport land deal, the closed bid contracts for the Manus Island and Nauru hubs, up to the 2017 $1 billion Helloworld contract, the Robodebt scheme and much more.

In summary, Charles notes that the current Government:

‘…had developed a series of programs and grant schemes under which large sums of public money are spent, in an attempt to avoid the requirement of legal authorization.’

The sports crime program, for example, has been described as corrupt by constitutional lawyers, as unauthorized by law, illegal and in violation of the rule of law.

Parking expenses involved $660 million, but were one component of a much larger fund of $4.8 billion.

In recent times, another glaring reminder of Trump’s influence in the Morrison Administration has been the disproportionate allocation of emergency funds to Coalition voters compared to Labor voters during the disastrous floods in eastern Australia (although the Coalition retracted due to political and public reasons). Pressure).

This reflects Trump’s delay, for example, in allocating federal emergency funds to Democratic states, such as to fight wildfires in Democratic California in 2020.

It can be anticipated that if the Morrison Government returns to power on May 21, Morrison himself will take it as an endorsement of the practice of circumventing legal authority for the distribution and disbursement of public funds.

Further efforts will be used to weaken Parliament’s role, undermine its relevance and tarnish its reputation, while keeping it afloat as a kind of “representative circus” when legislation cannot be avoided or is needed to authorize a right-wing agenda.

It can also be anticipated that Morrison will interpret another electoral victory in more cavalier terms than in 2019, seeing himself as the recipient of another “miracle”, as a political master.

Morrison’s continued leadership would result in failing to address the threats of climate change, growing socioeconomic inequality, inhumanity toward the vulnerable, and environmental vandalism. He will also fundamentally tear apart the fragile democratic fabric of “representative government.”

The rigid glue of any Humpty is unerring rectitude with no basis in principle, morality, ethics, or politics. It is simply power. It is essential to walk away from responsibility when things go wrong, to deny responsibility for anything that might damage self-esteem, and to blame others.

Any Humpty puts up great ads outside, once said making them real for now. Queries are launched with a movement of the lips and thus become solutions to problems that are best ignored or simply disliked. Just ask the elderly care workers.

Humpty despises critics with passionate intensity because they inexcusably intrude on the prime minister’s bubble of esteem.

The hostility of the people of Cobargo is intolerable, as is the attempt by a former Solomon Islands High Commissioner to speak with them during the election campaign.

Charles I of England is my favorite Humpty, because he is a great model. Believing in his divine right, he dissolved Parliament in 1629, offended by its impertinence in questioning his demands, refusing to summon it again for 11 years.

He proceeded to rule without seeking parliamentary approval to raise funds, producing calamitous political divisions and triggering the Civil War of the 1640s.

Unfortunately, there are parallels between Charles I’s evasion of legal clearances and those increasingly normalized by the Coalition in Australia.

Morrison’s claim to authenticity, to a commitment to ‘liberal democracy’, cannot be taken seriously given his record as prime minister in the way public funds have been used, described by Charles and Williams as ‘blatant political corruption’.

Peter Henning is a Tasmanian historian and author.