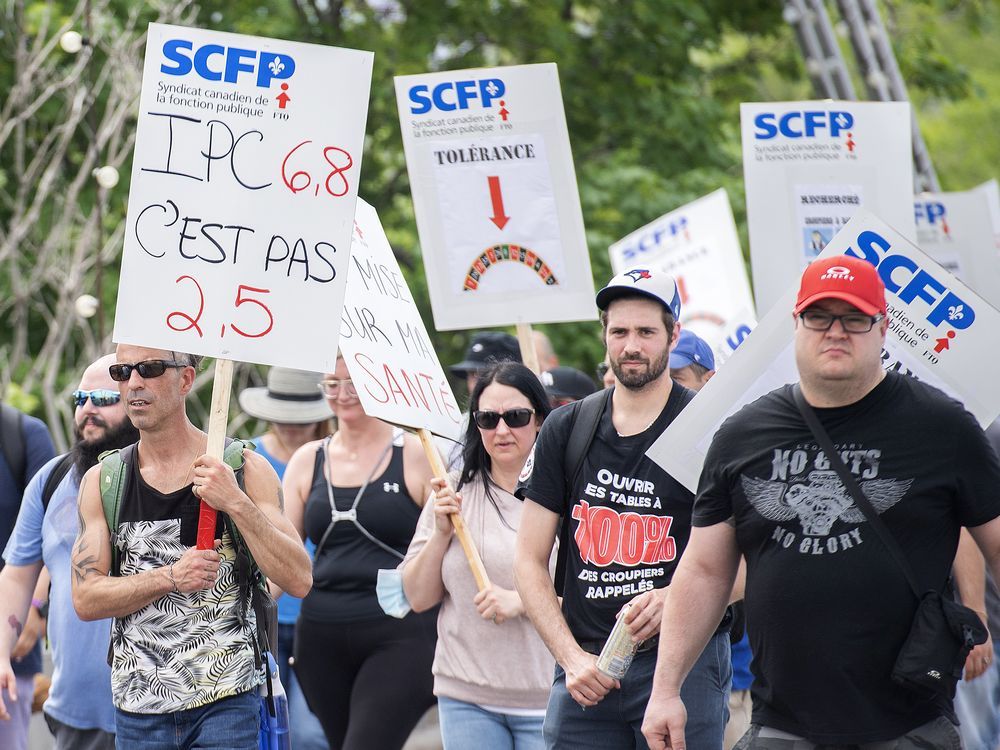 Croupiers at the Casino de Montreal launched an unlimited general strike on Saturday, citing pay cuts for new hires and poor working conditions that are leading to physical injuries as major problems.

The strike began at 9 am Saturday and will continue until negotiations with Loto-Québec are resolved, union representative Jean-Pierre Proulx said.

The workers organized a picket in the afternoon, marching from the Île-Ste-Hélène metro station to the casino.

“One in two of our employees sustain physical injuries due to the nature of the job, which includes delivering nearly 10,000 letters a day, five to six days a week,” Proulx said. “After 15 years on the job, that starts to add up,” resulting in tendinitis and other repetitive strain injuries, he said.

The launch of the unlimited strike follows two work stoppages last weekend carried out by employees to denounce the impasse in negotiations.

Loto-Québec, which runs the province’s casinos, said it was disappointed with the strike, but said operations at the Montreal casino would continue as normal and patrons would have access. The gaming tables, restaurants, slot machines and shows are operating as normal, while the poker room is closed.

The collective agreement that regulates the working conditions of 521 dealers expired on March 31, 2020, with wages and hours among the issues at stake.

Due to shorter shifts, croupiers often have to work six days a week to rack up more than 30 hours on their paychecks, Proulx said.

Loto-Québec issued a statement saying that it offers safe and optimal working conditions to its employees.

“However, the Montreal Casino croupiers ask for 30 minutes of paid rest for each hour worked. Therefore, they would spend more than 30 percent of their shift on paid breaks, which is unusual in the industry,” the provincial lottery corporation said.

In addition, Loto-Québec is seeking a 10 percent cut in pay for new hires, down from the current $18.40 an hour to $17.44, Proulx added. “In the current context of labor shortages, (reducing wages) is irresponsible and the union will never accept it,” said Proulx. “We demand better management of work shifts and breaks to prevent injuries.”

Loto-Québec responds that the opening salary is 20 percent more than what is offered on the market.

Loto-Québec says it wants to reach a “responsible negotiated agreement” and said the negotiations were similar to those accepted by other CUPE-affiliated unions at other casinos it operates.

Negotiations between the union and Loto-Québec lasted until midnight Friday and continue, Proulx said.

Canadian Press contributed to this report