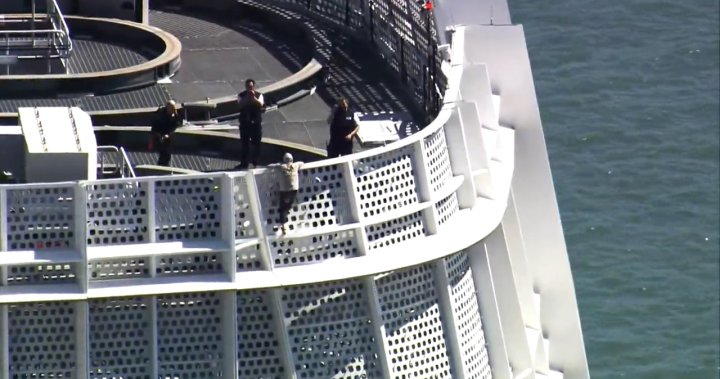 A person who scaled the Salesforce tower in San Francisco was detained by police Tuesday when he reached the roof, local news video showed.

The San Francisco Fire Department tweeted a photo of a person climbing up the side of the tower, which is located on Mission Street near the San Francisco-Oakland Bay Bridge near downtown.

“San Francisco Fire is on scene with other public safety agencies at 415 Mission, Sales Force Tower for a reported climber climbing the 60-story tower,” the agency said.

“This individual is putting the lives of firefighters and the safety of the public at risk.”

The fire department asked the public to avoid the area while emergency services investigated. The person was later taken into custody, the department said.

A video circulating on social media appeared to show a man in a gray hoodie, gloves and pants scaling the building. He was shown grasping the side of a beam as he climbed.

Starting at 1:50 p.m. ET, a live feed from ABC7 News Bay Area showed the climber in police custody on the roof of the building.

It is not clear if they will face charges or what kind of charges they may face.