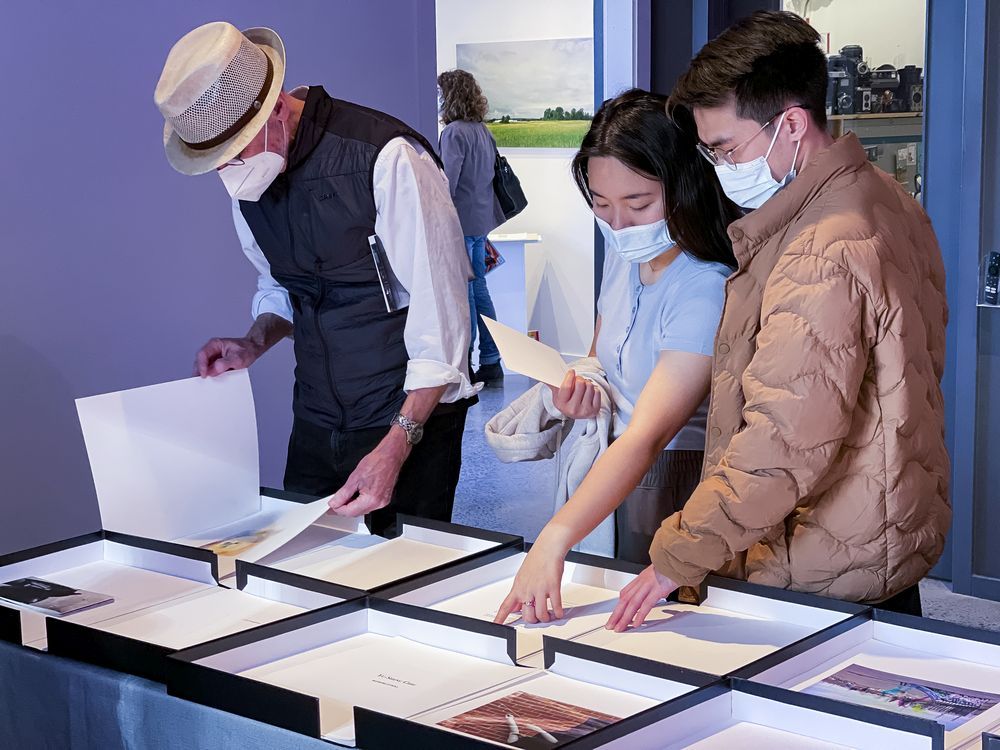 The School of Photographic Arts: Ottawa was lively Friday night, packed with visitors looking for the debut of an art exhibit featuring works by recent graduates of the school’s two-year diploma program.

From images inspired by string theory to photos of February’s “Freedom Convoy” taken by a drone, a wide and creative range of pieces was found, accompanied by their artists. The atmosphere of the debut of the Exhibition No. 17 was light and cheerful, with several attendees curious to know the stories behind the photos presented.

Darren Pottie, program manager for the gallery, said he was eager to see how visitors would react to how attractive the gallery was compared to previous showings.

“There is food cast in resin alongside photography and architectural material, there are photos that require you to interact with it using mirrors,” Pottie said. “The artists really polished the way they present their artwork in a way that demands viewer participation.”

A white iMac computer was placed near the gallery entrance on a desk, displaying shortcuts to digital photo files on its desktop in the colors of the rainbow. Student Julien Fontil’s works appeared by clicking on the computer screen, which he said was to place viewers in his position as photographer and editor.

“Naturally it translated for me. I always see my work on screen, so why print it when I can show it to people as I see it all the time? Fontil said. “I rode on film, but I do all my work on a computer screen. So I’m always looking at my work through a screen.”

Working as an experimental musician for the past decade, Fontil said he views photography through a similar lens to when he’s recording music.

“We tried a lot [in music], and I feel like photography is like you’re getting a taste of the world,” he said. “If I’m outside and I see something that speaks to me, I shoot it. It’s about working with what’s in front of you.”

Similarly, photographer Ann Piché said that she draws much of her work from her love of science and math. Nicknamed “Click Click” by her husband for the many photos she takes of her experimenting with different forms of light, motion and prisms, she said it’s “important to realize there’s math all around us.”

“Sometimes it’s nice to translate it into something we can understand, and that’s what I tried to do.”

Pasted on the walls of the gallery’s second room were the colorful, abstract photos of Piché’s project “Beyond the Visible,” which explores string theory and his notion of the multiverse. A QR code appeared below the prints, leading people to an intricate audio file with mixed audio from NASA’s Parker Solar Probe and Voyager 1 and 2. By combining the “out of this world, strange” sounds with photos of him, he said he hopes it piques the interest of visitors enough that they will look up topics like string theory.

“I want that work to be a visual medium that opens conversations about things that may not be so familiar or that may be difficult to understand,” said Piché.

Not all graduate students used traditional photography in their work; Justin M. Millar used a drone to capture footage of the first day of the “Freedom Convoy,” as well as a shot of pigeons flying over Gloucester. He started taking pictures during the pandemic to get out of the house and quickly found his way to photography school.

“I started to see how my work was very different from all the drone photographers’ work, it was a little more artistic,” Millar said. “I just wait [people] like.”

Working with unique angles, he said that one of his two featured works had to be flipped for display because it was “too immersive”. The photo, “Birds over Gloucestor,” is taken downward from the perspective of a tall building, looking down a busy street with a large flock of pigeons flying overhead.

“I just hope the audience gets caught up, but doesn’t fall for it,” he laughed. “I think some people have said, ‘Okay, I’m starting to feel it.'”

While he initially started working with drone photography, Millar has since experimented with traditional cameras as well. His drone went down earlier this year while he was filming a new project. An emergency landing caused him to be run over multiple times by trucks on their way to the “Freedom Convoy” in the country’s capital. Now without a drone, he has been taking photos of his five-year-old son and action figures.

“I mean, I got a good one from plastic Robert Pattinson as Batman,” Millar said. “This is relevant right now,” he added, referring to the film’s recent release.

The exhibit is available for viewing at SPAO’s websitebut those interested can attend in person from Wednesday to Sunday from 12 to 5 p.m. until May 15.