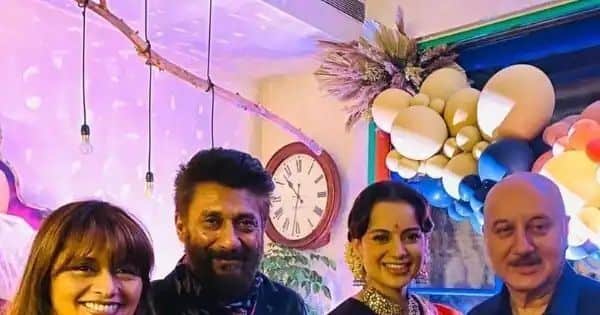 Ever since director Vivek Agnihotri’s The Kashmir Files has released in theatres, Kangana Ranaut can’t stop raving about the film, which is based on the exodus of the Kashmiri Pandits in the 1990. The movie, which stars Anupam Kher, Pallavi Joshi, Darshan Kumar, Mithun Chakraborty and others in prominent roles, have created history at the box office with its mammoth run. It has collected Rs 79.25 crore in just 6 days of its release. While The Kashmir Files continues to make waves in the industry, it is being said that Kangana is keen to work with Vivek in his upcoming film. Also Read – The Kashmir Files: Sandeepa Dhar reveals that her parents are suffering from PTSD after seeing the movie; she says, ‘Like a punch in the gut for me’

According to Bollywood Hungama, Vivek has initiated talks with Kangana for one of his upcoming films and the actress has also shown her active interest for a collaboration. It is being said that things are at an early stage and an official announcement will be made in the next months if things get materialized. “Both of them bond well together and have similar ideologies. A collaboration was always round the corner. The talks are in very early stages and once they materialize, an official announcement will take place. So far, it has been just a couple of meetings between the two,” a source was quoted as saying by the portal. Also Read – Lock Upp: Kangana Ranaut and Ekta Kapoor’s reality show to bring together these contestants as finalists [EXCLUSIVE]

Kangana was recently spotted by the paparazzi after the screening of The Kashmir Files. When asked about her reaction, she said, “Unko bohut bohut badhai. Unhone poori film industry k jitne bhi Bollywood k kiyehui paap hai aaj inhone dho diye sabne milke. Bollywood k bhi paap dho diye inhone (Many congratulations to them. Together they have purged the film industry of all their sins. They have also washed away the sins committed by Bollywood).” Also Read – The Kashmir Files: Anupam Kher says the film has ‘opened up wounds that never healed’; denies it having ‘anti-Muslim sentiments’

Meanwhile, Kangana has an exciting line-up of movies such as Tejas, Dhaakad, Manikarnika Returns: The Legend Of Didda, Emergency, and The Incarnation: Sita. She is also producing Tiku Weds Sheru, starring Nawazuddin Siddiqui and Avneet Kaur, under her production house, Manikarnika Films. She is currently hosting Ekta Kapoor’s reality show Lock Upp.