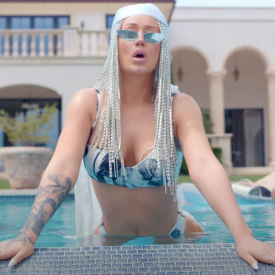 Iggy Azalea claims that she and her son Onyx were kicked off a United Airlines flight.

“I was flying with my son and they sold our seats while the door was still open and then refused to take our bags off the plane even though all other flights were full for that night. I explained to him why leaving me stranded is one thing, but carrying a baby’s luggage sucks. There are things you really need. They do not care.”

She continued: “Lucky I booked a different airline but the average person would have been crazy and fucked up so I just wanted to warn other moms… Be careful! [shining heart emoji].”

Then the airline came over, but Iggy didn’t want to talk.

“There’s no need to dig into anything [crying laughing cat emoji]Iggy replied “I and other families have shared our seemingly VERY common experiences of your airline selling child seats after check-in, leaving families stranded, refusing to return luggage, etc. [shrug emoji].”