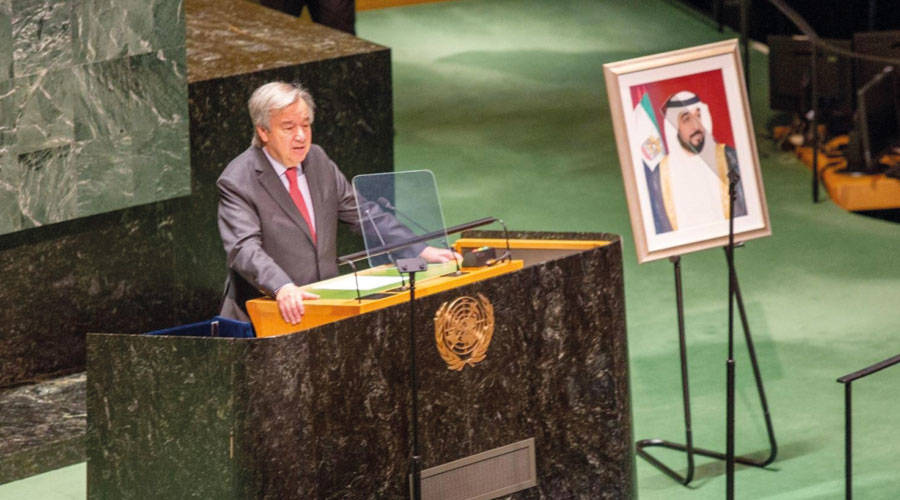 United Nations Secretary-General Antonio Guterres renewed his condolences to the government and people of the United Arab Emirates on the death of the late Sheikh Khalifa bin Zayed Al Nahyan. positions and achievements, which were based on the foundation laid by the founding father, the late Sheikh Zayed bin Sultan Al Nahyan.

The Secretary-General referred to the late Sheikh Khalifa’s saying: “My father is my teacher. I learn something from him every day, I follow his approach and understand his values ​​and the need for patience and prudence in everything. ”, noting that Sheikh Khalifa learned these lessons well.
He said: On these foundations laid by the late Sheikh Zayed, the late Sheikh Khalifa led the Emirates to see today the most important cities of our world.
The Secretary-General reviewed some of the manifestations of civilizational transformation witnessed by the UAE in the fields of support for global multilateral humanitarian action, investment development and promotion, and research in the field of renewable energy and climate action to protect the planet for future generations. among others. “I will always remember the generosity of Sheikh Khalifa and the Emirati people towards those in need…this massive increase in his support for multilateral humanitarian action has saved countless lives and motivated others to give as well,” Guterres said.
He referred to the role of the deceased in promoting sustainable development and climate action to protect our planet for future generations and the consequent promotion of investment and research in the field of renewable energies to diversify the country’s energy mix and reduce emissions. of carbon. amazed by my visit to the largest single-site solar power plant in the world,” he said. It is “Noor Abu Dhabi,” which includes more than 3 million solar panels stretching across the desert, which he considered logical do Abu The city of Dhabi, home to the International Renewable Energy Agency, the first international organization to focus exclusively on renewable energy, plays a vital role in supporting countries in their transition to a sustainable energy future.
Guterres said: “In this time of mourning, we recall the late Sheikh Khalifa’s advice that “preparing for the future, near or far, begins today, not tomorrow,” and calls on the international community to strengthen the partnership with the Emirates. United Arabs”. under the leadership of His Highness Sheikh Mohamed bin Zayed Al Nahyan, President of the State May God protect you and build a world of peace, prosperity and dignity for all (WAM)