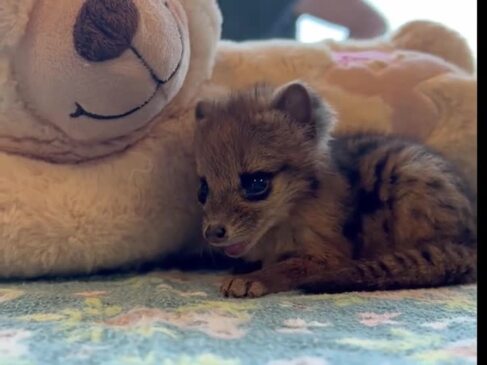 Keepers at the Nashville Zoo recently welcomed the first known spotted fanaloka to be born in the United States, images released Friday, May 13, show. The male cub was born on April 29 to a pair of rare fanalokas that recently arrived at the zoo. Fanalokas, which are related to mongooses, are native to the lowlands and rainforests of Madagascar and were listed as a “vulnerable” species by the International Union for Conservation of Nature in 2016 due to deforestation and hunting. The nocturnal species is considered the second largest predator in Madagascar, with a diet consisting of small mammals, reptiles, aquatic animals, bird eggs, and insects. “We are honored to have them here and help conserve this vulnerable species,” the zoo said on its Facebook page Friday morning. Credit: Nashville Zoo via Storyful