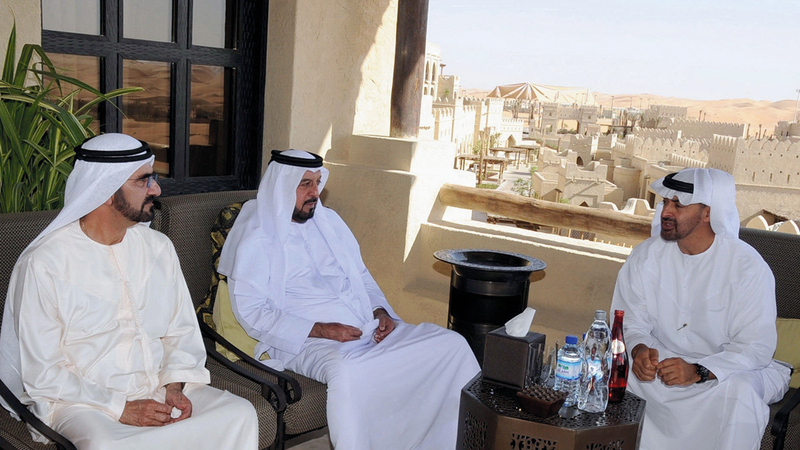 The UAE has made a number of achievements during the era of the late Sheikh Khalifa bin Zayed Al Nahyan, may God have mercy on him, the most recent of which was the UAE ranking in the top 10 globally in 20 key indicators. of global competitiveness related to the energy and infrastructure sector for the year 2021.

Thanks to the support and vision of the late, the UAE managed to take rapid steps and occupy a leading world position in the field of infrastructure and housing.

The Ministry of Energy and Infrastructure, in compliance with the directives of the late Sheikh Khalifa bin Zayed Al Nahyan, may God have mercy on him, focused on the balanced development of all regions of the country, as it carried out its tasks efficiently and effective in the planning, design and maintenance of federal buildings, with great support through the implementation of a group of pioneering projects in all sectors with record investments exceeding 40 billion dirhams.

Total federal assets amounted to more than 3,000 federal buildings that ranged from healthcare, education and health facilities, government service buildings and facilities, as well as mosques.

During the era of the late Sheikh Khalifa bin Zayed Al Nahyan, may God have mercy on him, the ministry made great strides in the field of highways, as the length of federal highways reached more than 900 km through the completion of more than 140 projects. , and the lengths of traffic lanes on federal highways reached 4,300 km over the past 18 years, linking the country’s regions and cities smoothly and flexibly, reflecting the ministry’s eagerness to develop and improve the high-quality road network, which has contributed to meeting the needs of population and urban expansion and expansion, accommodating the growing increase in traffic, as well as improving transportation and circulation.

The Ministry has paid much attention to water facilities as an important tributary in water development, for example, dams and water canals within its strategic plans, especially in seasonal times, and the increase in rainfall, as they have been implemented and maintained 106 dams over the past 20 years, and the absorption capacity of dams and water lakes has been improved by more than 200 million cubic meters, which has strengthened the state’s water security system. The UAE government’s instructions aim to achieve a sustainable environment and infrastructure, and the Ministry of Energy and Infrastructure has developed ambitious action plans to implement these instructions.

The Ministry worked to provide infrastructure with all its inputs, including road networks, residential neighborhoods, airports and ports, hospitals, schools, higher education institutions and others, and to create all the appropriate conditions that achieve well-being and quality of life. .

Infrastructure in the United Arab Emirates is one of the most prominent manifestations of economic and social development and the most important tributary of civilized development, which is relied on to improve living conditions and provide basic services to the people of the country.

The Ministry of Energy and Infrastructure has spared no effort to achieve housing stability and provide a happy life and well-being to citizens. Since its establishment, the Sheikh Zayed Housing Program has contributed to the stability of 33,838 citizen families by supporting housing and establishing integrated residential neighbourhoods.

The percentage of citizens who own a home in the UAE has exceeded 85.9%, which is one of the highest rates in the world, which in turn gives the beneficiary of their home the right to own and dispose of it while respecting the stipulated controls. and requirements.

The UAE has also established its leading position among the best marine centers in the world and has become one of the countries influencing the development of the marine industry. The practices, decisions and legislation issued by the state have contributed to the development of the sector. and the improvement of maritime safety standards in addition to the protection of the marine environment worldwide.

The UAE won IMO Council membership in Category B in 2017 and was re-elected in 2019, and the country hopes to be re-elected for the third consecutive time in the elections that will take place from December 6 to 15 this year, in the British capital, London, to continue its active role in promoting maritime legislation and regulations at the service of the maritime transport sector and international trade.

• The state has made giant strides in the field of roads and infrastructure.

The United Arab Emirates is one of the world’s key maritime countries and has set many records in indicators of global competitiveness in the maritime sector, having ranked third in the world in maritime trade facilitation and bunker fuel supply, and the fifth worldwide. among the most important international maritime centers The country is among the top 10 world ports in container handling volume, since last year more than 19 million containers were handled through the country’s ports, while the number of ships arriving at UAE ports reached more than 25,000 commercial vessels.

The UAE plays a competitive role in global seaborne trade, helping to strengthen the world economy. More than 27,000 shipping companies operate in the UAE, and the country’s ports are ranked among the top in the world, and the capabilities of our ports and shipping facilities exceed international standards.

The strategic location of the United Arab Emirates has also contributed to its being a leading hub for maritime business in the Arab Gulf states, East Africa and the Indian subcontinent.