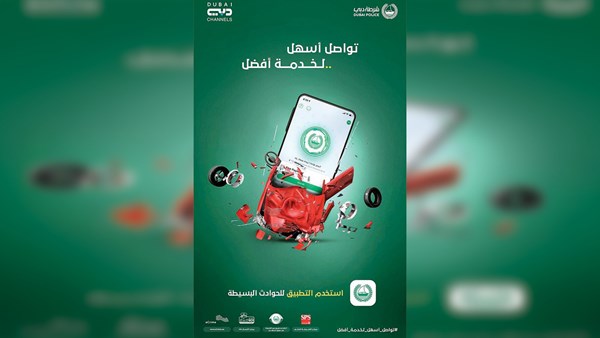 The Security Awareness Department of the General Department of Community Happiness of the Dubai Police launched the awareness campaign “Easier communication for better service”, which aims to raise awareness among community members about smart services that provides Dubai Police General Command in your smart app. , in addition to the services provided by intelligent “SPS” police stations in an easy and comfortable way without human intervention and 24 hours a day.
Butti Ahmed bin Darwish Al Falasi, Director of the Department of Security Awareness, confirmed that the campaign is part of the enthusiasm of the Dubai Police General Command to raise awareness of the importance of using the smart services available in the application of the Dubai Police, without the need to call the 901 call center for non-emergencies and 999 for non-emergencies. and working to make community members happy.
And he indicated that one of these services is the “minor accident notification” service, which allows customers to report accidents on their own, without having to wait for the police car, which helps to avoid traffic jams and waiting on the road. long time.
Al Falasi explained that using the “Report Minor Traffic Accidents” service through the Dubai Police app is easy and straightforward, as it requires the driver to enter the service and press the “Report an Accident” button, then enter the required data such as the vehicle data and driver’s license number of both parties to the accident, then photograph the two cars, and register how they want to obtain an accident report.
Al Falasi added that the campaign also includes raising awareness of the “Police Eye” service, which is an interactive service that allows customers to contact the Dubai Police to report any abuse, such as fighting, anti-social behavior or behavior that may cause a clashing with others, or reporting abuse, or selling drugs, or any act that brings the perpetrators under the law.

“SOS” service
Al Falasi noted that the campaign will also work to educate community members about the “SOS” service available on the smart app, which helps police and ambulances quickly deliver assistance to those in need in case of emergency. that they are exposed. to any emergency and in record time.

cyber crime platform
Al Falasi indicated that the campaign will also include awareness of the “ecrime” platform to receive complaints from members of the public related to cybercrime, in a fluid and easy way through the electronic address www.ecrime.ae, indicating that the ” ecrime” The platform provides a service for receiving complaints and reports of crimes related to the Internet, which includes: electronic extortion, electronic piracy, financial fraud, transfer crimes and illegal use of credit cards.
He pointed out that there are simple steps to file a complaint through the ecrime platform, since after entering the website www.ecrime.ae, the first step begins with determining if the complaint is related to cybercrime or the service provided. online, completing the data form, and then confirming the contact number of Through a text message, the complainant will receive it on his mobile phone, to finally write the complaint and identify the accused.

“SPS” Police Stations
Butti Al Falasi explained that the campaign also includes promoting awareness of the services provided by Smart Police Stations (SPS), intelligently and without human intervention, 24 hours a day, indicating that Smart Police Stations at the level of the Emirate of Dubai provide a set of important services in the criminal and traffic fields, and obtaining certificates and permits.
He also indicated that smart police stations provide “the possibility of registering a criminal complaint without the need to meet with employees, through direct communication by videoconference with the investigative officers who speak in several languages, while the officer discusses with the client all the details. , then sends the client a record of his statement for him to sign.”