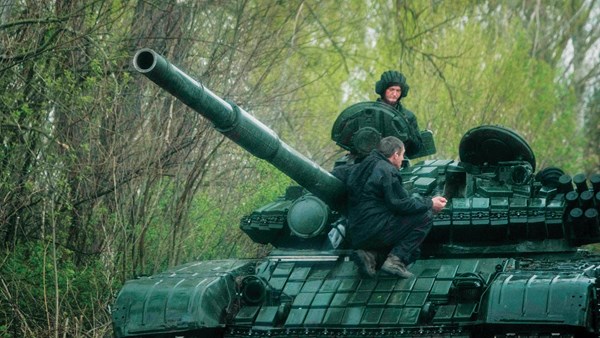 The General Staff of the Ukrainian Armed Forces reported yesterday that Russia has deployed Iskander-M mobile missile launchers 60 km from the border with Ukraine. In its daily morning update on crisis developments, the Ukrainian armed forces said: “The Russians have increased the number of forces in the Belgorod region by transferring and mobilizing additional units.”
“According to available information, the Iskander-M missile launchers have been deployed 60 km from the border with Ukraine,” it added, without giving further details on the location of their deployment.
It was not yet possible to verify the authenticity of the reports. There was no immediate reaction from Moscow to these reports.
The city of Belgorod is the administrative center of the Russian region of Belgorod, north of the border with Ukraine.
The Iskander, a mobile ballistic missile system named SS-26 Stone by NATO, replaced the Soviet Scud missile. The dual-guided Iskander missiles have a range of 500 km and can carry conventional or nuclear warheads.

Poland donates $1.6 billion worth of weapons to kyiv
The Polish prime minister announced that his country has so far provided Ukraine with $1.6 billion worth of weapons to help it deal with the Russian attack.
“Until now, Poland has transferred to our eastern neighbor military equipment worth about 7 billion zlotys, or more than 1.6 billion dollars,” Mateusz Morawiecki said after a meeting in Krakow, southern Poland, with his counterpart. Ukrainian Denis Shmygal. “This team saves Ukrainian, Polish and European sovereignty,” he said in a statement. Since the beginning of the Russian attack on Ukraine in late February, the Polish government announced that it had supplied Ukraine with especially anti-tank and anti-aircraft missiles, mortars and ammunition, as well as drones. The support also included forty tanks and about sixty armored vehicles, according to Polish media reports, which were not officially confirmed by the government.
During their meeting in Krakow, the prime ministers of the two countries signed an agreement on cooperation in the field of railways and maritime transport for the transport of Ukrainian goods, which allows kyiv to bypass the blockade imposed by Russia on Ukrainian ports. .