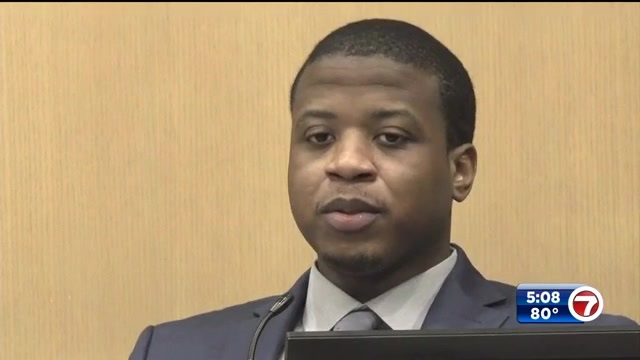 FORT LAUDERDALE, FLA. (WSVN)-A man who was convicted of murdering a woman inside his Davie home in 2014 has been sentenced to life in prison.

Friday’s sentencing of Dayonte Resiles in the Broward County Courthouse followed an emotional day in court that featured testimony from the families of the victim and defendant, as well as Resiles himself.

A jury found him guilty of first-degree murder in a retrial in March.

The defendant’s first trial ended in a mistrial. A juror said someone was unwilling to convict him because of the color of his skin.

Police said Resiles broke into the home of 59-year-old Jill Su and was trying to rob her when he found her inside.

The victim’s son, Justin Su, later found her face down in a bathtub with her hands and ankles bound.

Prosecutors in the case told the jury that the evidence pointed to Resiles.

Nan-Yao Su, the victim’s husband, did not mince words in addressing the accused.

“True evil looks like this. That is the face of evil sitting there,” she said while pointing at Resiles.

Before being sentenced, Resiles addressed the court and denied killing Su.

“You can hook me up for a polygraph test at any time, ask me any question you want, and my answer will remain the same: I did not kill Mrs. Su,” he said.

“That is not a crime that he would have committed, and I stand by that, I put my life in it. I know he didn’t,” he said.

Nan-Yao Su said that he is relieved that the trial is over.

“Tomorrow we can start the healing process. It’s an empty victory because no matter what you do, she can’t come back,” she said. “It’s empty, but at least we can live the rest of our lives with beautiful memories.”

“I’m glad I don’t have to go back to court, be physically here anymore,” Justin Su said. “It’s very nice. I hope to continue and enjoy the rest of my life.”

Resiles has 30 days to appeal his sentence.