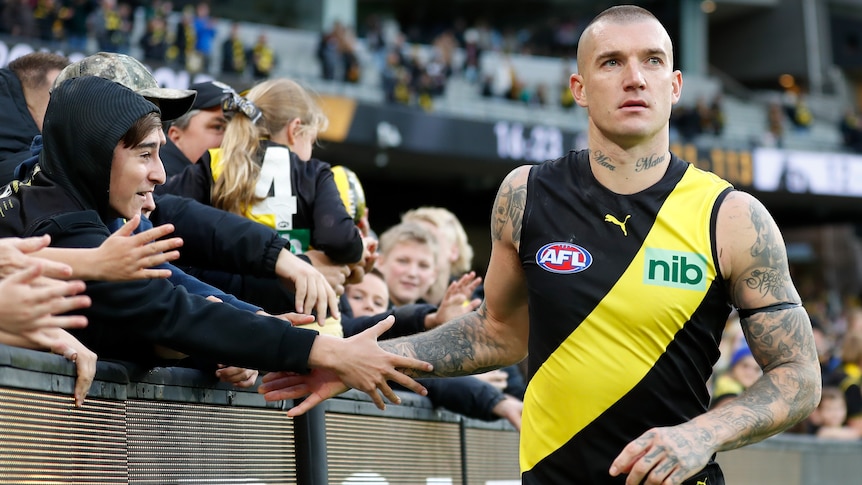 Martin was playing his first match after a six-week absence for personal reasons.

Speaking to Saturday Morning Sport on ABC Radio Melbourne, Hardwick said Martin has never been comfortable in a media environment and was disappointed by some of the criticism.

“He was probably a little upset with some people who cared more about them and less about Dustin,” Hardwick said.

“He’s not really interested in providing ongoing commentary on his life and what it looks like and feels like to be Dustin Martin. That is not him.

“It’s not arrogance, it’s just a feeling that he likes to own himself. He’s very isolated, he doesn’t let many people in.”

Martin scored twice against the Magpies last week in a solid return to action, and Hardwick said three-time medalist Norm Smith provides more than enough for the game with his game alone.

“At what stage do we say ‘This guy has provided two and a half hours of entertainment, he basically lost a kidney last year. This guy gives a lot.’

“And don’t get me wrong, he gets paid a lot for what he does, but he provides incredible service from people who pay their money to see two and a half hours of Dustin Martin brilliance.

“At what stage is that enough? Do we really need two questions to sit there and provide the icing on the cake? Or are we just happy that Dustin does what he does and provides the brilliance he does on a weekly basis?

“At some point he will sit down and talk, but that time is not now.”

Richmond will go into their ninth-round game against Hawthorn in the top eight and in better form, and Hardwick said the return of his talisman gave the entire club a timely boost.

“Having him back last week was incredibly important, and it gave our whole club a boost,” he said.

“He still has his good days and his bad days, but for him to be there just to play his game, it was huge.

“You could see when he kicked that goal, every player on the pitch got to it. Our entire coaching staff was a little cloudy in the coaches’ box as well.”

“It’s great to see players come back from adversity, but it’s also great to see fans applaud the return of such a player. It was a really moving moment not only for Richmond but for the AFL.”