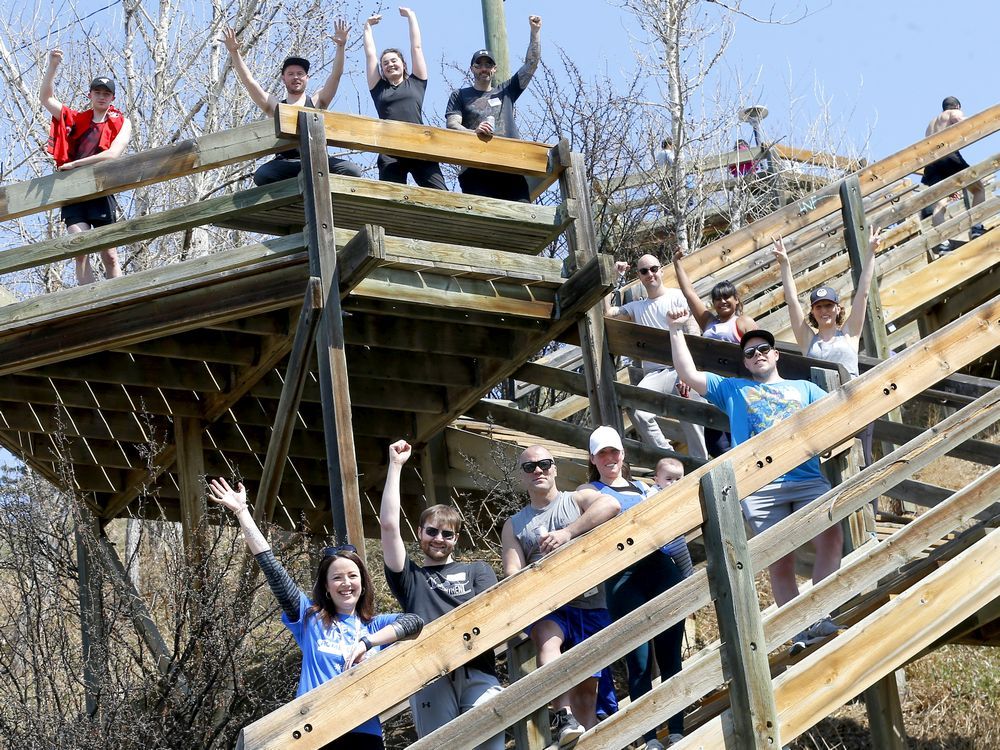 After a two-year hiatus caused by the COVID-19 pandemic, Inn From the Cold, a Calgary nonprofit, resumed its Steps to End Homelessness fundraiser over the weekend.

The 11th annual event on Sunday had more than 100 people running up and down the 167-step calf-shredding ladder at McHugh Bluff in Calgary’s Crescent Heights neighborhood, with the goal of raising $50,000 to help break the cycle of lack of family housing.

Heather Morley, executive director of Inn From the Cold, said that after two years of the pandemic exacerbating the community’s need for the organization’s offerings, the fundraiser provided an opportunity to engage the public on the topic of the cold. family homelessness.

“And most importantly, (it helps) raise funds for our shelter operations and our programs that support families,” Morley said.

Today is the day! Join us on the steps of McHugh Bluff today, play some games, have some family fun time, and help us end child and family homelessness in Calgary! #stepstoendhomelessness

In sunny weather after a week beset by an out-of-season spring snow dump, the dozens of participants set off throughout the day on Sunday. Contestant Carol McQuade, who ran up and down the stairs 11 times, said the hardest runs were the first and last.

“Anything in between, just keep going. The top third (of the ladder) is where the leg burn occurs,” McQuade said.

“I just think it’s a fantastic cause and it’s a unique way to raise money and it really supports fitness, but it also supports homeless awareness in the city.”

Steps to End Homelessness was founded in 2009 by advocate Suzanne West and has since become one of Inn From the Cold’s largest annual fundraisers. The event is now held in memory of West, following her death from cancer four years ago.

“My sister always wanted to make a difference in the world. On her 45th birthday, she walked 45 flights of these stairs to celebrate; is what inspired this event,” said Kathy Rwamuningi, Suzanne’s sister.

“Suzanne wanted others to feel that same sense of accomplishment. She was passionate about giving back. So even though she is no longer here, the energy of her is felt on this day.”

On Sunday morning, as the climbers had just set off, Morley said they were getting closer to their goal of $50,000, a huge feat for the organization that gets most of its operating budget through fundraising.

“Every part of fundraising makes a difference in the lives of the families we serve,” Morley said.

“The demand for our programs and our shelter since the beginning of the year has been enormous. . . We need the money more than ever.”