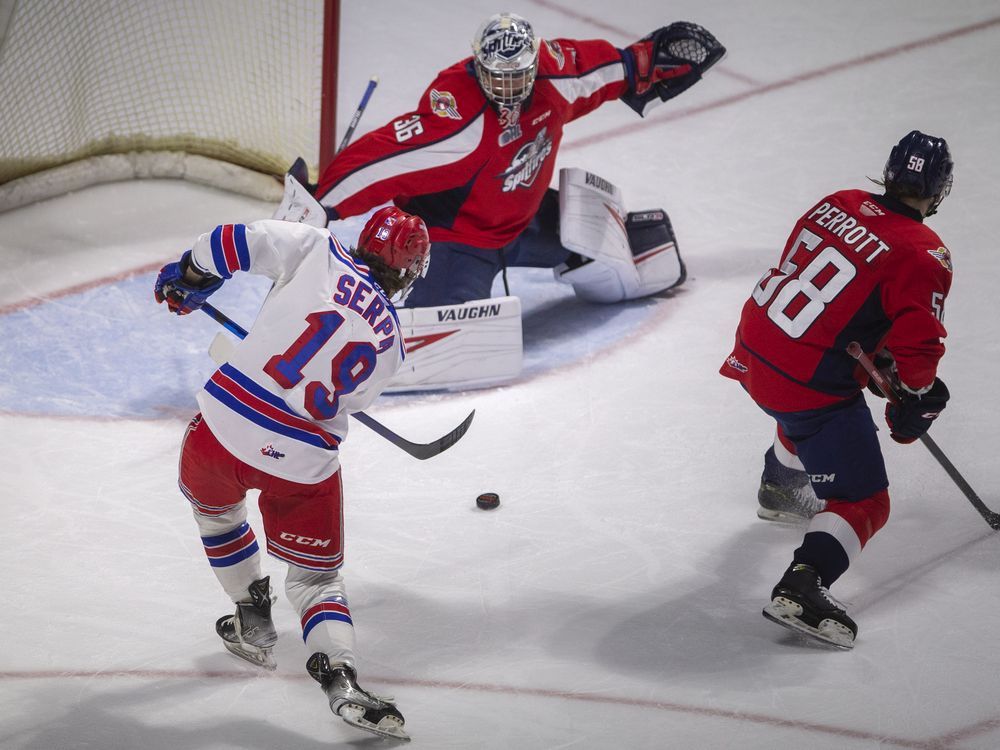 The top-seeded Windsor Spitfires know this is not the time to take a foot off the gas.

Back-to-back wins in Kitchener over the seventh-seeded Rangers have the Spitfires one win away from the club’s first Western Conference finals appearance since 2011.

After Thursday’s 6-3 win at Kitchener, the Spitfires lead the best-of-seven semifinal series 3-1. Game 5 is Saturday at the WFCU Center at 7:05 p.m.

“I think we should treat it like a Game 7,” said Spitfires defenseman Michael Renwick, who scored the club’s first goal in Thursday’s comeback. “A must-have (game).”

The Spitfires only need to look back to the first round when the club had eighth seed Sarnia Sting down 3-1, lost Game 5 in overtime and needed to win Game 6 on the road to clinch the series.

For a team trying to make a run for a league title, the sooner a series ends, the more time the club has to rest, recover and prepare for the next challenge.

The Spitfires have fallen behind more often than not in this series, but have managed to fight their way to taking control of the series.

“You never want to drop in a game,” Spitfires center Wyatt Johnston said. “(The Rangers) have been able to come out very strong and we need to match that on Saturday.”

One of the main reasons the Spitfires managed to bounce back is the play of Johnston, who was involved in 14 of Windsor’s 20 goals in the series.

OHL regular season scoring champion Johnston, who was limited to seven points in six games against Sarnia, now leads the league in playoff scoring with 21 points.

“I think personally I’ve been able to find my confidence and really adjust to the level of play in the playoffs,” said Johnston, who had his third four-point game of the series in Thursday’s victory.

But Johnston isn’t the only player who has upped his game. Forward Alex Christopoulos had the first four-point game of his career in Thursday’s victory and captain Will Cuylle had three assists as the trio combined for 11 points in the game.

“Cuylle and Christopoulos have also been playing really well and have been able to produce a ton in this series as well,” Johnston said.

Christopoulos, who arrived at Windsor in a trade with North Bay earlier in the season, started the series in the fourth row. Savard took it to the top lane with Johnston and Cuylle in the second period of the series opener. He responded with his first OHL hat-trick and has five goals and seven points in the series.

“He had a chance with that line and he showed he can generate,” Savard said of Christopoulos. “He had (74) goals with Don Mills (minor midgets in his draft year), so he knows where the net is.”

And at net is where Christopoulos has consistently been in this series to record 25 per cent of Windsor’s goals.

“It’s been a great series so far,” Christopoulos said. “You have to work for the puck and stand in front of the net to be rewarded.

“It’s a mentality that I take in general. Most of the goals in this series are scored in the foul areas in front of the net.”

Like the rest of the Spitfires, Christopoulos is happy to be in the series, but knows it’s not over yet.

“It’s important to finish this series next game because we have home court advantage, but it’s going to be a battle,” Christopoulos said.