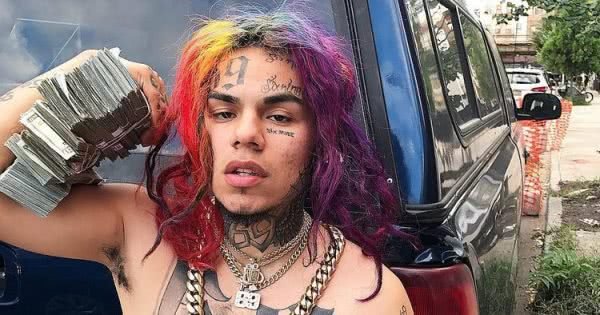 Tekashi 69 took a little hiatus and now that he’s back, his whirlwind personality is shaking things up again! She recently showed up at a nightclub in Miami and reportedly left with a fist to the back of her head.

According to TMZ, Tekashi showed up at Pilos Tacos Tequilla Garden in Miami and on his way out, he was allegedly punched in the back of the head. TMZ obtained video of the alleged incident, which shows Tekashi walking out of the club surrounded by security guards.

As his team cleared the way for their exit, a man can be seen throwing a punch in Tekashi’s direction. The blow apparently landed on the back of 6ix9ine’s head and the man quickly ran from the scene. While it’s unclear why the man got his paws on the rainbow-haired rapper, reports say he acted shortly before the alleged incident took place and clubgoers may not have felt his presence on stage. .

It’s not unusual for Tekashi 6ix9ine to ruffle some feathers, and he’s stayed true to his troll persona on the ‘gram. Tekashi is currently in the middle of a cyber war with 42 Dugg and Perkio, who looks like Lil Durk, and things are getting spicy!

After Perkio was seen in a video with 6ix9ine, he alleged that he was ambushed by rapper ‘Gine’ and did not want to participate in his antics after he bad-mouthed the late King Von, Lil Durk and OTF. Tekashi denied Perkio’s claims and stated that he knew very well that they would be making a video together.

Tekashi suddenly directed his tirade at 42 Dugg, threatening to “set fire” to him “with consent”. The two rappers proceeded to shoot each other Wednesday night, with Dugg eventually agreeing to throw his hands at each other. He entered The Shade Room saying:

With my consent, let’s do something.”

While Tekashi’s social media problem seems to have manifested itself in real life, it didn’t seem to have been eliminated by the puzzling blow. In fact, he reportedly proceeded to sign autographs for fans after leaving the club.