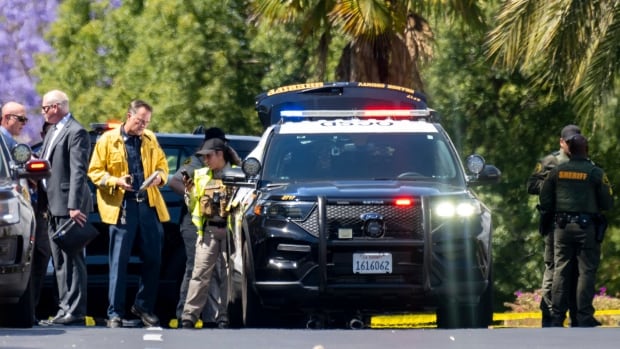 One person was killed and four others seriously injured in a shooting Sunday afternoon at a Presbyterian church in a suburban Southern California community where most residents are elderly, authorities said.

A suspect was in custody. A fifth person injured suffered minor injuries, authorities said; all the victims were adults.

The shooting was reported shortly before 1:30 p.m. PT at the Geneva Presbyterian Church in the town of Laguna Woods, the Orange County Sheriff’s Department said on Twitter.

Agents took one person into custody and recovered a weapon at the scene, authorities said. It was not immediately clear where in the church the shooting occurred.

About 30 people witnessed the violence, said Carrie Braun, a sheriff’s spokeswoman. Most of those inside the church are believed to be of Taiwanese descent, Braun said.

Federal agents from the Bureau of Alcohol, Tobacco, Firearms and Explosives were responding to the scene. The FBI also sent agents to the scene to assist the sheriff.

Laguna Woods was built as a community for seniors and later became a city. More than 80 percent of residents in the city of 18,000 about 50 miles southeast of Los Angeles are at least 65 years old.

California Governor Gavin Newsom’s office said on Twitter that it was closely monitoring the situation.

“No one should be afraid to go to their place of worship. Our thoughts are with the victims, the community, and everyone affected by this tragic event,” the tweet read.

The incident occurred in an area with a cluster of places of worship, including Catholic, Lutheran and Methodist churches and a Jewish synagogue.

On its website, the Geneva Presbyterian Church describes its mission as “remembering, telling and living the way of Jesus by being just, kind and humble.”

“Everyone is welcome here. We really mean it! Geneva aspires to be an inclusive congregation that worships, learns, connects, gives and serves together.”

The shooting came a day after another incident across the country, when an 18-year-old man shot and killed 10 people at a supermarket in Buffalo, New York.

“This is disturbing and concerning news, especially less than a day after a mass shooting in Buffalo,” said US Rep. Katie Porter, whose district includes Laguna Woods. “This should not be our new normal. I will work hard to support the victims and their families.”